College admissions—quite possibly one of the most stressful things you'll go through as a young adult.

There's so much pressure. Pressure to test well on your SATs, have a balanced resume of community service, leadership positions and internships, all while being team captain of a sport or being fluent in three languages. Take it from someone who felt that pressure and then some. 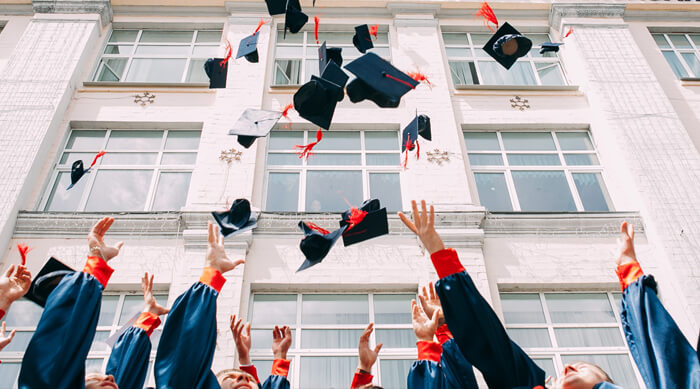 I went to a small private school for elementary and middle school, where I really excelled in academics and was given the opportunity to learn at an incredibly fast rate. I was doing 11th grade math in eighth grade and had read almost the entire high school curriculum of literature prior to stepping foot in a ninth-grade classroom. Needless to say, academics came easily to me in high school, which was actually a disadvantage because I was able to relax while still hovering at the top of my class.

My high school class schedule consisted solely of AP classes and then honors if there wasn't an AP class available. And when it came time to take the SATs and ACTs, I scored very very well. I'm not telling you this to make you feel bad—in fact, quite the opposite.

You see, I thought I had college in the bag. I had a 4.5 weighted GPA with all of my AP classes, I was varsity cheer captain, I had enriching summer jobs and had even accrued 500+ hours of community service at my local hospital and aquarium. I forget what I wrote my admissions essay on, but I thought it was compelling, and I was confident in my prolific writing skills—creative writing always was my favorite class aside from biology.

I applied to many schools, around 20 if my memory serves me right. But there was one school I was set on: Columbia University. Growing up in Southern California, I had big city dreams of moving to New York City. I wasn't quite sure what I would do there or what my life would be like but I knew N.Y.C. was where I was meant to be, and Columbia would be my alma mater. I was set on their lit-hum program and loved that it had a gorgeous campus while still being in N.Y. Not to mention, it's an impressive school, and I always envisioned myself confidently responding "Columbia" when asked where I decided to go to college.

From the title of this post, you already know the outcome. Columbia was not in the cards for me. I remember slowly starting to receive acceptance letters from incredible schools that many would kill to attend. My Columbia letter arrived in Feb., and I remember right when I saw the envelope that good news wasn't inside. It was a standard letter, not a large, exciting, alluring acceptance that I received from others. It was a standard letter. I didn't open it right away, I was too sad. I remember opening it in my room and seeing the words "waitlisted" and feeling like my whole world was falling apart. Waitlisted? How? Who was a better candidate for Columbia than me?

I knew I had to reevaluate my entire life plan, something you'll get very used to as you get older and older. I strongly considered going to New York University to still live out my N.Y.C. dreams, but I wanted a school with a gorgeous campus and NYU just didn't have that. Ultimately, I decided on the University of Southern California. It was always a top choice school for me because as much as I wanted to move away, I was also a bit of a homebody.

I can confidently say now that had I gone to Columbia, my life would be very different today and most likely not for the better. I truly believe everything happens for a reason. Had I not gone to USC, I wouldn't have landed in entertainment and probably wouldn't have gone on to be a television host or launch my own skincare line. There have been so many wonderful opportunities that have come my way thanks to the Trojan family, and now, owning my own business, I continue that spirit and try and hire USC interns and alums when I can. Being in California for college also allowed me to have valuable internships and make incredible connections, one of them with the Managing Editor here at Sweety High who I met while interning at E! Entertainment while going to USC.

Going to your dream college might seem like the only thing that matters right now, but let me tell you—whatever ultimately happens is going to be better than you can even imagine. And don't get so tied up in a narrative you've created for yourself that you can't see your real-life fairytale story unfolding. Good luck!

And since we mentioned being a homebody, HERE's how to get your homebody friend to go out.