Here's What Happened When I Switched to a Relaxing, Weighted Blanket

I've experimented with a ton of gadgets, routines and supplements over the years as I've worked toward the perfect night's sleep.

My sleep quality has improved a lot as my habits have gotten better, but it's still not where I'd like it to be, so I try to keep an eye open for new things. Recently, I've been hearing a lot of good things about weighted blankets, which are said to reduce anxiety, stress and insomnia.

I definitely have the last, so I reached out to a company called Weighted Idea, who enthusiastically hooked me up with a weighted blanket of my own. When it arrived, I was eager to take it home and see how it would impact my sleep.

Weighted Idea makes heavy blankets designed to help people deal with stress and trouble sleep. They're filled with tiny, but heavy, plastic beads, which are sewn into small squares all throughout the blanket in order to evenly distribute the weight.

Most weighted blankets recommend a blanket weighing about 10% of your body weight. According to a post on Weighted Idea's Facebook page, this is meant to "relax the nervous system, increase melatonin and serotonin levels and decrease cortisol levels to improve their mood and promote restful sleep by imitating deep pressure touch simulation."

I was sent a dark grey 12-pound blanket. 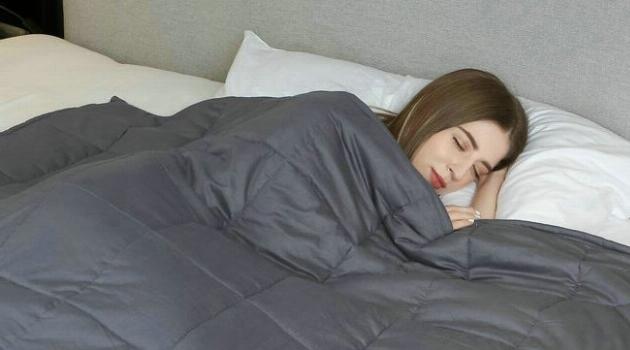 
When the bag containing my weighted blanket arrived at the office, I was surprised to find how heavy 12 pounds could be. As I took it out of its packaging, I saw that it was an appropriate size for a twin-size bed. Eager to try it, I draped it over my shoulders at my desk. Immediately I felt super cozy, and I had a very relaxing rest of my work day—though it's hard to say that was entirely the blanket's doing. It felt heavy, but it didn't totally drag me down, and I had a productive day.

I brought it home that night to see how it'd affect my sleep. Though the blanket is sized for a twin bed, I just put it over the other sheets in my queen-sized bed, and that worked out fine. Using the blanket in bed felt quite different from my experience in the office, as I also didn't expect the blanket to feel so light when it was more evenly distributed over my body. Still, I could feel it pushing down slightly on me. It was kind of like a warm hug. 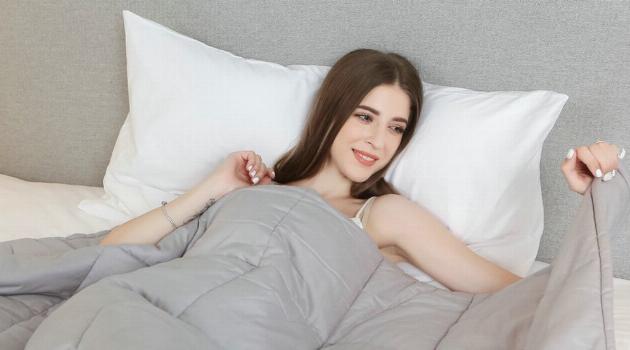 I typically have a tough time getting to sleep, as my mind often races with the thoughts of the day, and though I'm not usually super stressed, silly little things can keep me up. That night, I fell asleep very quickly, and I woke up feeling great in the morning. My chest did feel a little sore initially, but it quickly subsided and that didn't happen on subsequent nights.

I've continued using the blanket, and it's continued working like charm. I can't speak to whether it actually impacts my nervous system and changes my levels of neurotransmitters, but I can say that I've been getting better sleep. I feel like I've been falling asleep faster, and the tension seems to melt away when I'm under the blanket. 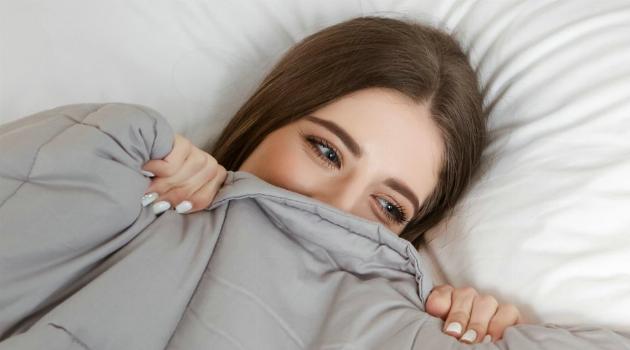 I also don't find myself tossing and turning as much, and the blanket is usually in exactly the same place it was when I fell asleep. This is rare, as I usually wake up with my blankets in a bundled mess at my feet. Occasionally, the blanket does get a little too warm, so I poke out a leg or arm to keep cool. I anticipate this will become a bigger issue as summer arrives, but for now, it's a minor inconvenience.

And I don't just use the blanket for bedtime. I also enjoy snuggling up on the couch with the blanket around my shoulders while I watch TV or read, and that's become one of my favorite ways to relax.

Though there is one tiny downside when you're that comfortable. In the mornings, it's been especially tough to get out of bed because staying under the blanket sounds so nice.


After about a month of using the Weighted Idea blanket, I have no plans on stopping anytime soon. While I can't prove any of the scientific claims made by the company, I can say that I'm sleeping extremely well and that the blanket has made my life notably cozy.

On Amazon, my Weighted Idea blanket retails for about $100. This is quite a bit more affordable than many competitors, though it may be a steep price point for new users—particularly if you haven't used a weighted blanket before and don't know how much it will help you. I swear by it, but the effects may vary from person to person.

If I had to make one complaint about the blanket, it'd be that its warmth won't necessarily be suitable for all year round. I may have to pack it up for the hot summer months, and I won't be happy about it—but it should keep me cozy and warm when winter returns. 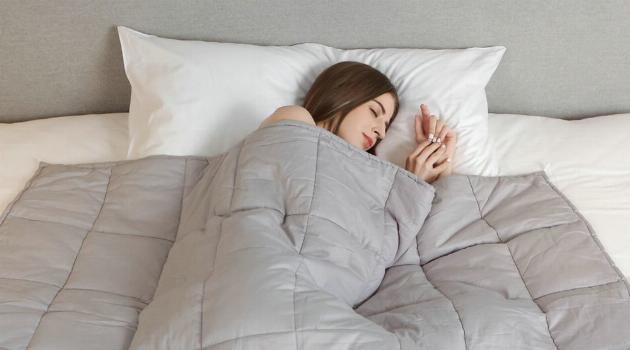 If you're curious about a sleep supplement that actually works, click HERE for my review of SOM sleep drinks.