I am and always will be a bonafide dog person.

Growing up, I had two dogs of my own, Sugar Bear and Teddy Bear, who with a single tail wag and a quick lick of my face, could make my day.

When I heard that my hometown Los Angeles was responsible for America's first-ever dog cafe, appropriately called The Dog Cafe, I knew I had to go. So, when I received an email last week saying I was invited to spend an hour with some pups at the doggy joint, I jumped at the chance. 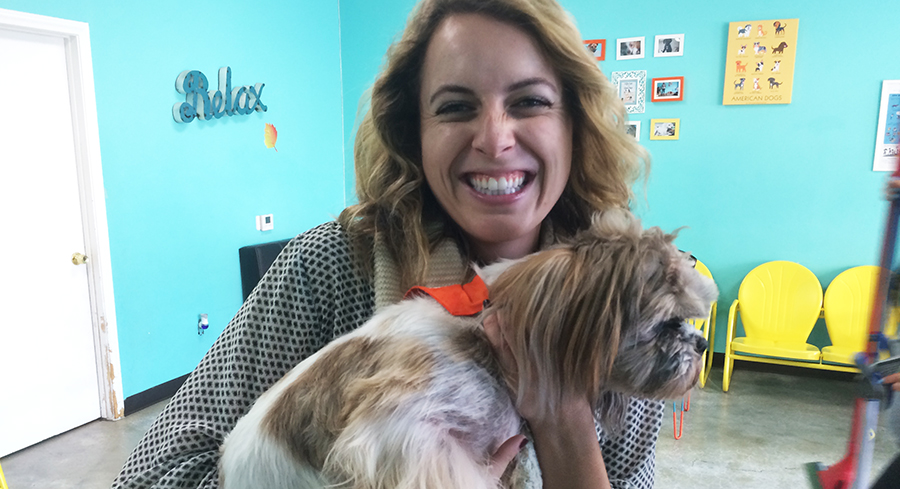 On Thursday afternoon I headed over to the cafe with my cat-loving co-worker Ashley for an hour slot with the dogs and the owner of the cafe, Sarah Wolfgang.

When we arrived, we were instantly impressed by all the swag set up right in the front of the shop. Who wouldn't be tempted by a Boxer-shaped purse and a "Coffee Cups and Rescue Pups" shirt? We know we were.

After placing our coffee and tea order, Sarah led us out into another space right next door where all of the dogs were housed.

I looked around the quaintly decorated room and counted off five pups. I knew I had to get to know them all individually. 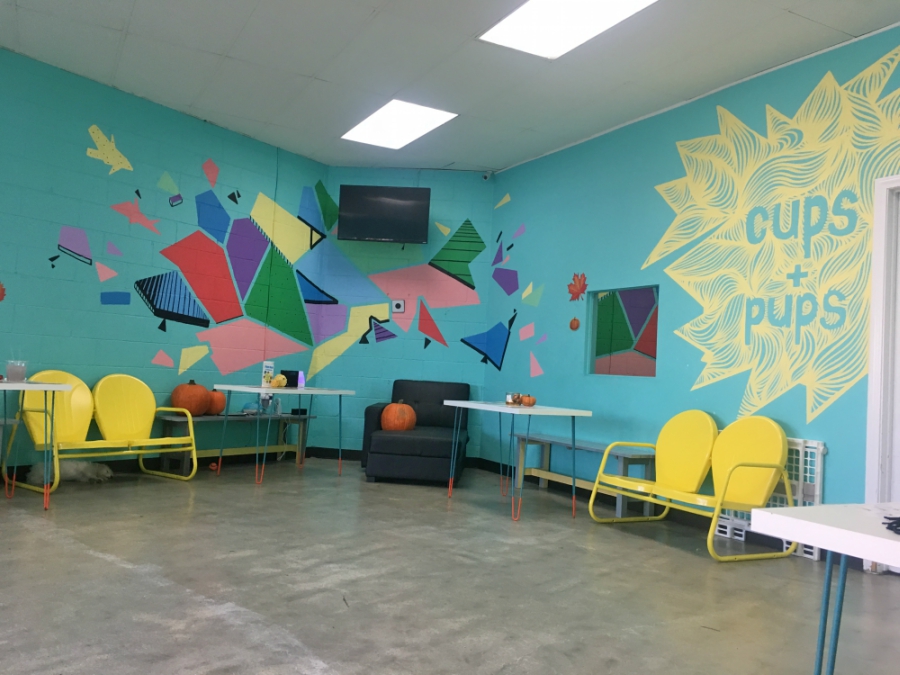 The first three dogs to greet me were Bart and Lisa (an inseparable brother and sister pair 👫) and Moonshine (a one-and-a-half-year-old Miniature-Pinscher/Terrier). They were all friendly, but it was apparent that they were on the timid side. 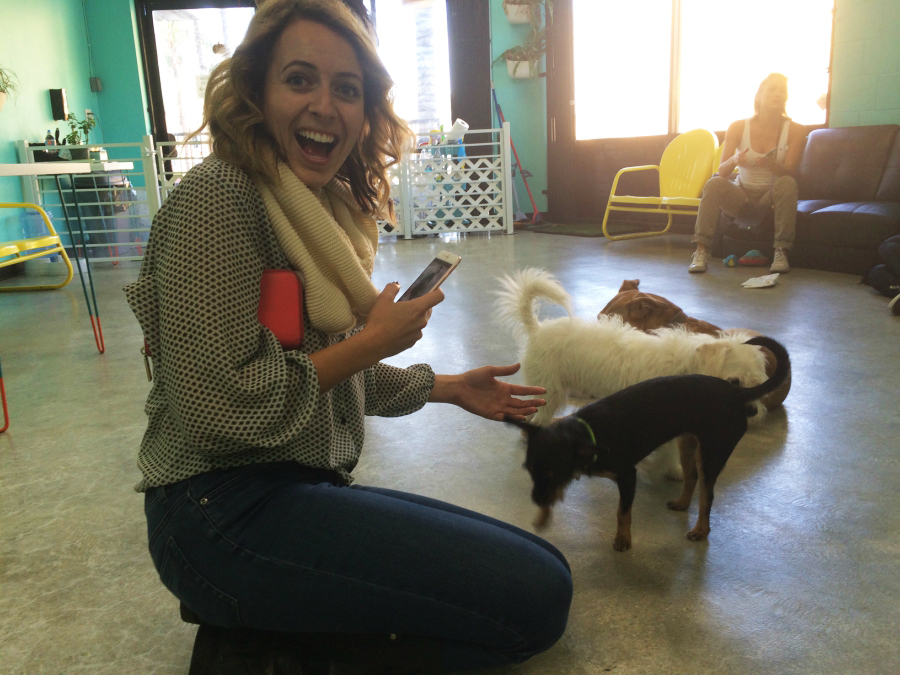 Sarah explained to us that most of the animals staying at the facility were acquired with the help of volunteers from two places—North Central and the South L.A. Animals Services. Unfortunately, most of the animals come in with a history of neglect.

When I first approached Moonshine, the pup pictured below, she was very cautious. She sniffed and licked my hand for a good ten minutes before she looked comfortable enough for me to pet her sides and the top of her head. 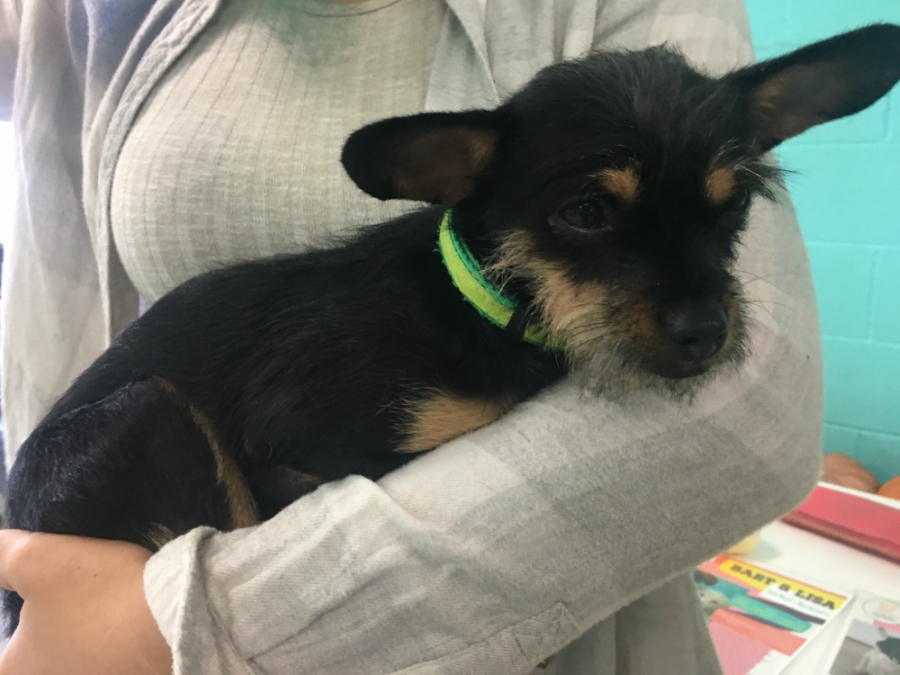 Sarah told me that when Moonshine first arrived she wouldn't let anyone hold, let alone, touch her. She'd hide in the corner and often fall asleep standing up, an indicator of PTSD (post traumatic stress disorder).

Now, thanks to the loving care that The Dog Cafe has provided her with, Moonshine allows people to touch, cuddle and play with her. Sarah even described her new and affectionate love as "fairy-dust like," because it's so pure and genuine.

Moved by Moonshine's touching transformation, I continued to ask the backstory of each dog that I encountered.

Mimi, a 12-year-old German Shepherd mix sprawled out by herself in the corner, was the next pup that caught my eye. Sarah shared that Mimi was adopted in 2004 and then recently taken back to the shelter after the family she belonged to grew tired of her barking.

Mimi spends 80% of her day lounging, 10% of her day eating and then the rest of the day playing her favorite game, fetch. 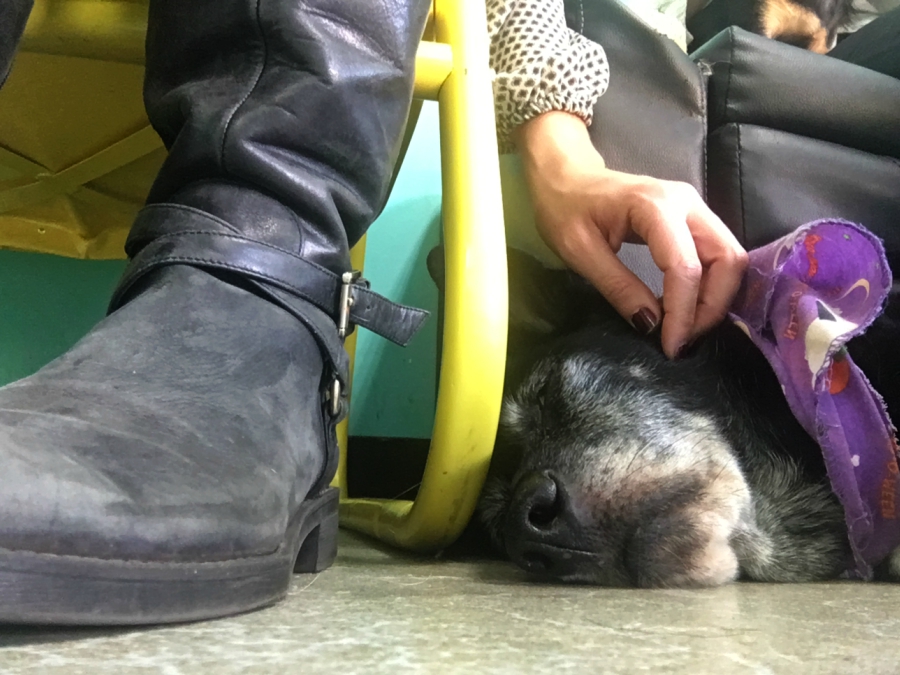 When I sat next down next to the sweet girl to meet her, she quickly nuzzled my hand and totally embraced every moment of me scratching her.

The remainder of our visit we spent sipping on our teas and watching an energetic seven-month-old Mastiff named Meathead play fetch.

Sarah revealed that Meathead had a brother in the back room named Meatloaf. The brother-sister pair came from the same litter, but unlike Lisa and Bart, aren't attached at the hip. Because the two seem to behave better when roaming independently, they can be adopted separately—a choice made to ensure that they have the best chance of finding a family. 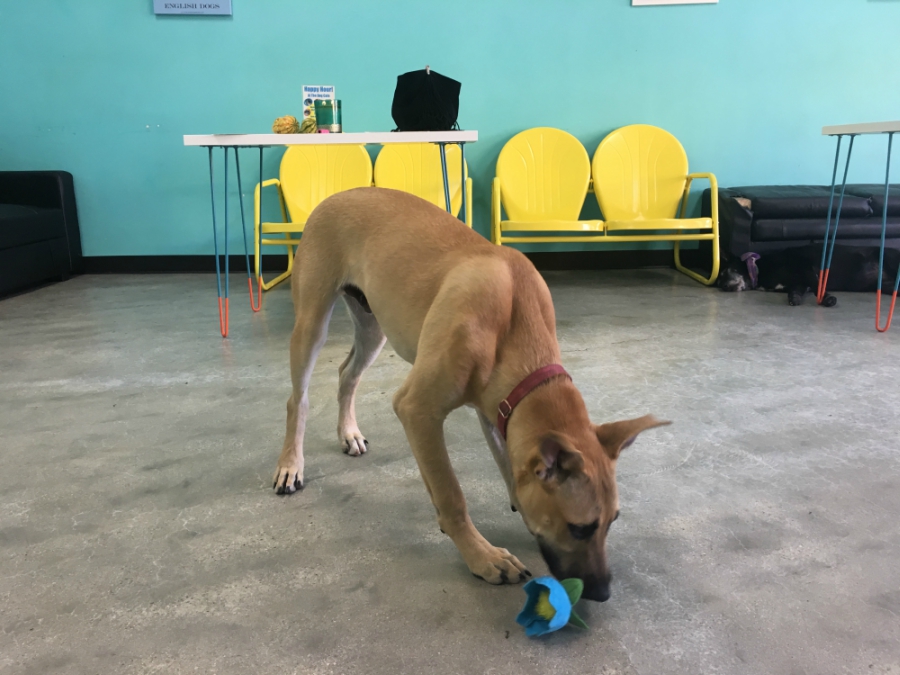 It was apparent through my chat with Sarah that The Dog Cafe is careful to make sure each pup goes to a loving, forever home. No adoption is taken lightly or made final until it's obvious that the dog and human are a perfect match.

If you have a soft spot for dogs and are in the L.A. area, I highly recommend you go check out the cafe for yourself. If you're between the age of five and 17, make sure to bring a parent or guardian with you!

The dogs and their stories will pull on your heartstrings and make you reconsider ever getting a dog from a pet store again. Spread the word, and together we can help these pups find a loving home.

For more information about The Dog Cafe, adoptions or fostering, check out their website HERE.

If you love dogs but also have a soft spot for cats, you have to head over HERE and check out our visit to L.A.'s first cat café!