18-year-old actress and singer-songwriter Jenna Davis is making a huge splash in her first major role as the voice of the killer doll M3GAN in the new horror thriller of the same name—and she's just getting started.

The horror-comedy dropped last Friday and has already been a box office smash hit, with a narrative that's somehow equally memorable and genuinely terrifying. There's a good reason it's being met with critical acclaim, and Jenna's incredible voice performance is a huge factor in why the film works. She's proven she's equally comfortable on the screen and behind the microphone in a voice booth, and we're fully obsessed. If you feel the same way, keep scrolling to discover everything we learned about her as our latest Woman Crush Wednesday. 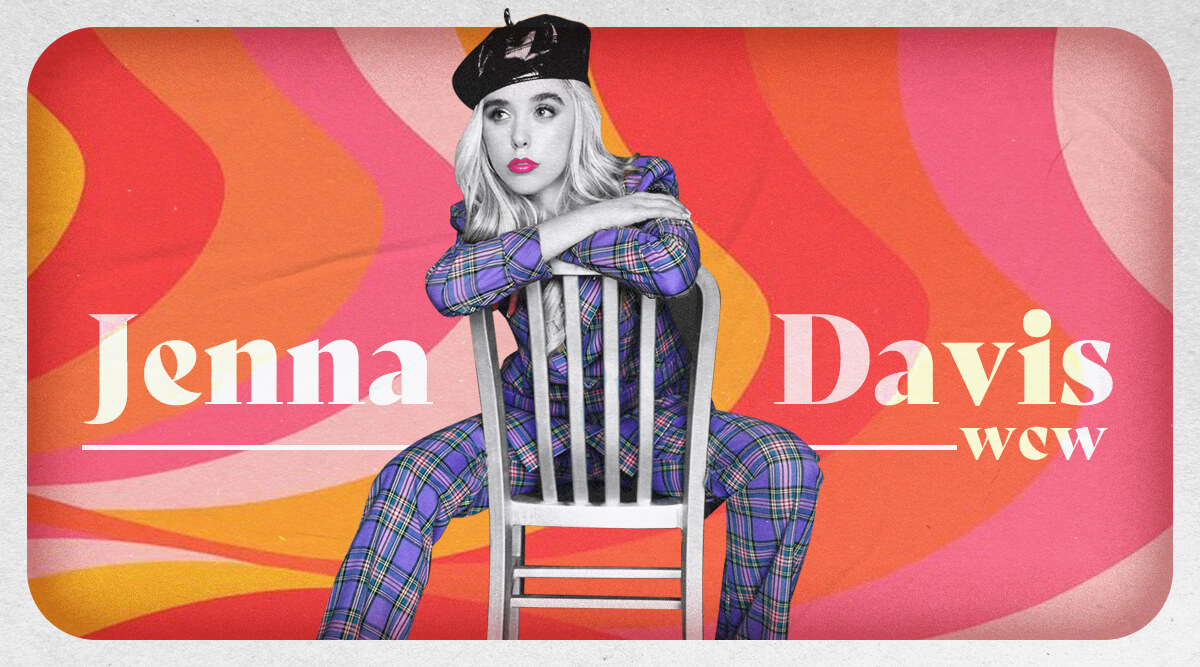 Hometowns: Born in Plano, Texas and moved to Chaska, Minnesota at the age of 4 before moving to L.A. as she was turning 11

2. She considers herself pretty adventurous when it comes to food.

"One of my favorite hobbies is actually going out with friends to new restaurants and ordering random new foods to try."

3. However, she cannot stand gum.

"It's not that I don't want my breath to smell good. It's just that the texture and the chewing noises gross me out."

Also read about: Everything You Wanted to Know About Actress, Comedian and Influencer Jess Val Ortiz

"Both my sheets and comforter are built into one, and to make my bed all I have to do is zip with the hidden zippers located on the sides of the bed. It also has a built-in minky material inside, so I have a really hard time getting up in the morning because it is so comfortable."

5. Taylor Swift and Morgan Wallen put on the best concerts she's ever been to.

"When I went to Taylor, it was her RED tour, and there was nothing more iconic than seeing her onstage singing the songs from that album. Both artists did phenomenally, and I love how both of their songs and lyrics tell stories. That is something I hope to achieve with my own music!"

6. She loves combining words to invent new ones.

"In fact, I replaced scandalous with scangalous and Zoom with zoot. They sound silly, but they are super fun to say! Most recently, I wanted my parents to say yes to something, so before I asked the question, I said, "Everyone say yes," then I asked the question. Now, my entire family overuses that phrase when we want to persuade the other person to say yes."

Also read about: Everything You Wanted to Know About Model, Dancer and Influencer Sydney Bell

7. Her favorite color is yellow.

"Overall, it's just a really happy color that radiates happiness and good energy."

8. Over the years, she's had a number of fan encounters that touched her heart for different reasons.

"One of my favorites was meeting these two twin girls while on tour. There is an app called Cameo that has a feature where you can join a video with your fans for a short period of time, and the two would always join when I went live, so I got to know them pretty well. I will keep their names anonymous for privacy reasons, but it was such a joy to meet them face-to-face after learning so much about them over the last year! It almost felt like I was meeting two close friends that I had never met before!"

9. Her family and friends never fail to make her smile. The same goes for ice cream!

"I will never decline a good cookie dough ice cream scoop in a waffle cone."

Also read about: Everything You Wanted to Know About 'Fall in Love Alone' Singer-Songwriter Stacey Ryan

10. The last celebrity she got starstruck over was Jodie Sweetin from Full House.

"I saw her and her daughter shopping at a local Trader Joe's and I watched her on my TV for so many years that I just stood there holding my groceries in shock."

11. There are two Disney princesses she finds most relatable.

"Perhaps, I find myself to be busy-minded and eager, similar to Rapunzel, yet calm and reserved, similar to Princess Belle."

12. Writing in her Psalmful journal every morning and evening is an important part of who she is as a human.

"Instead of looking at my phone the first thing every morning or right before going to bed, I instead write down what I am thankful for, any prayer requests I may have, blessings that occurred that day and a specific lesson I learned. This has been very mentally beneficial. I try to keep myself balanced in this industry that can feel like a rollercoaster at times."

Curious about our past WCWs? Click HERE to learn all about country artist Lily Rose.