We've been huge fans of the McClain sisters since the dawn of time. We were first introduced to China when she starred in A.N.T. Farm on Disney Channel. Then we found out that she and her sisters, Lauryn and Sierra, are all a part of the singing group McClain when they guest starred on an episode of A.N.T. Farm. They're like the Jonas Brothers, but better (yes, we said better!) because they exude plenty of girl power. Their flawless acting and singing skills is just one of the reasons we admire these ladies to no avail. These nine other reasons why they are our Woman Crush Wednesday will make them ~your~ #WCW this week, too. 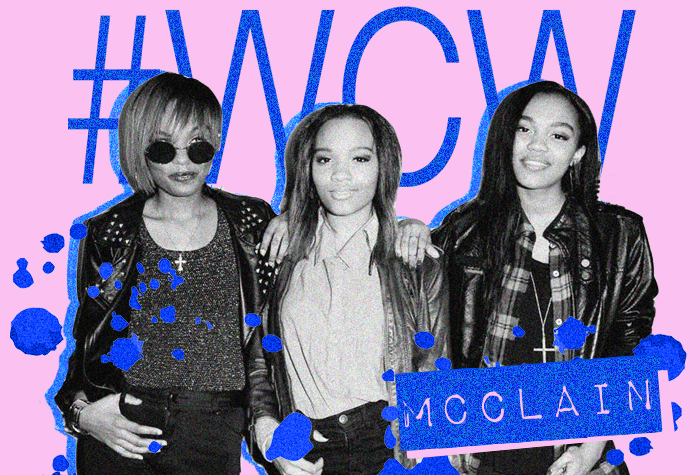 Favorite Color: Lavender (It's all of their faves!)

1. They all starred in the film Daddy's Little Girls where they even played sisters.

2. The first single they ever released as McClain was "Go" in 2012. Late last year, they said they were working on new music, so hopefully they come out with it soon!

3. They opened for Big Time Rush on the Better with U Tour. Still crying just thinking about how amazing this tour was!

4. Along with their parents, the sisters started their own production company called Gabesworld Music. It's named after their brother Gabriel.

5. The sisters are huge Rihanna fans and have been jamming out to her Anti album nonstop recently. We certainly would love to see them tour together!

what happens when we are getting ready @badgalriri @laurynmcclain @mynameissisi

6. The group performed at the 2014 Move Your Body Event in Washington, D.C. The event is presented by WAT-AAH! and its goal is to encourage kids to pursue a healthier lifestyle.

7. China and Lauryn have their own YouTube channel that we watch religiously. Their Karaoke Challenge video is arguably the most amazing thing you will watch in the entirety of your life.

8. The sisters are never afraid to be who they are, which continually inspires us to be ourselves and never change who we are for anyone.

Another reason we love McClain is because they're our go to when we need some serious style tips from these. Throwback to 17 times China was our #OOTD inspo.