Somehow, I entirely missed the gorgeous narrative adventure game Sumire when it dropped last year, but it only took one watch of its enchanting trailer to realize I had to remedy this immediately.

Lucky for me, it also just became available in the App Store, and the team behind the game was kind enough to share a review key with me. That very night, I booted up the game, and spent the next three hours or so going on a magical, often heartbreaking and fully unexpected adventure with the titular Sumire.

The State of Sumire

When Sumire begins, the title character isn't in the best place emotionally. She's recently lost her beloved grandmother and her parents have separated, with her dad having moved out, and her mother spending much of her time sleeping off her sorrow. Sumire also has a dream that, before her grandmother passed, there was one last message she needed to share with her, but she never got the chance to do so. 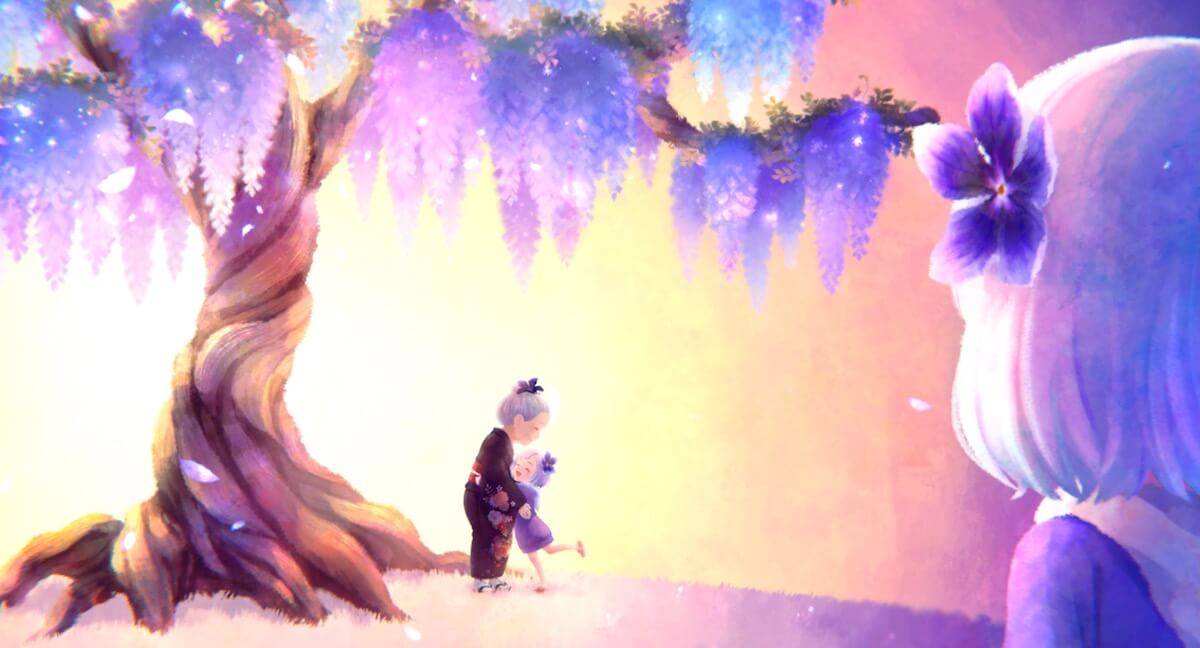 When she wakes, she discovers a strange glowing seed, and remembering some old advice from her grandmother, decides to plant it. By morning, it's blossomed into a magical talking flower, which has only a single day to experience everything that the human world has to offer. Sumire's reluctant to help, but when Flower promises to allow Sumire to see her grandmother one more time, she agrees, and the two head out into the world on their grand adventure—which is going to be much stranger and more challenging than either of them can anticipate.

Also read about: How to Find and Save Every Waddle Dee in Kirby and the Forgotten Land

If you play a lot of different types of games on your phone, Sumire's iPhone controls are likely to be familiar. Placing a finger along the left side of the screen allows you to move her up, down, left and right—not unlike the control stick on a normal game controller. When an aqua-colored ring on the right-hand pulses, you can press it, and it acts as an "interact" button to do things like progress dialogue or engage with different aspects of her world. There are also times when touch controls are utilized, such as in shops, when selecting dialogue options and in mini-games.

At first, you're just moving around Sumire's house, exploring the space and learning more about her through her interactions with the items in her home, but once you plant the seed and Flower comes to life, it'll be time to explore the world outside, heading further and further west to discover the secrets of Sumire's quaint Japanese village, and meeting its inhabitants—both human and animal alike. Both the narrative and adventure really do unfold by being curious, examining everything, and talking to everyone in order to discover Sumire's world and where she fits into it.

In the opening areas, you'll chat with cats and turtles and crows and cranes, each with their own unique stories, as you travel to a mystical wisteria tree. That may be your first goal, but it's far from the endgame—especially once you start logging quests in Sumire's journal when Flower challenges her to complete her "Perfect Day." New areas open up as you adventure, heading more and more to the left of the map. While the game is fairly linear, there are also opportunities to head back to earlier areas to complete quests, fulfill promises you've made to the characters along the way or simply to search for any items and coins you might have missed earlier. Before too long, Flower's fast travel system is also unlocked, making this process a lot faster—and on my iPhone XR, the loading screens were relatively fast and seamless.

In town, you begin to meet some of Sumire's classmates as well. As the game begins, you don't have a great relationship with any of them—but things don't have to be that way, and Flower lets Sumire know it. They also happen to be the key to a few elements of Sumire's "Perfect Day." There's Sumire's longtime crush, Kenji (who's about to move away), and his friend, Bo, a social outcast who no one else will show the time of day. There's also a group of mean girls, led by Sumire's nasty former best friend, Chie. They're incredibly unkind—but in a weird twist of fate, it's up to the player to decide their fates.

While it's possible to make choices in a lot of narrative games, in Sumire, it actually feels like they matter. Each time you make an important choice—either a kind one or a more malicious one—is reflected by a physical change in Flower—which becomes even more apparent when he starts to wilt, losing petal by petal throughout the day. By the end of the game, you'll get different experiences depending on whether you were good or bad.

Some of these choices can seem fairly mundane, such as making slightly rude comments to people. Others can be downright evil. For example, there's a horror movie-esque sequence involving Chie and the mean girls, in which Sumire can decide to give them a second chance—or decide that they're beyond redemption entirely. There's a surprising darkness to some aspects of this game, but I thought it only added to the complexity of the experience. I hate being mean in games, so I definitely played the game in a friendlier way, but after completing it, I'm really curious to see what happens when you go down the bad route—especially because I'm interested in how the game ends if you do. 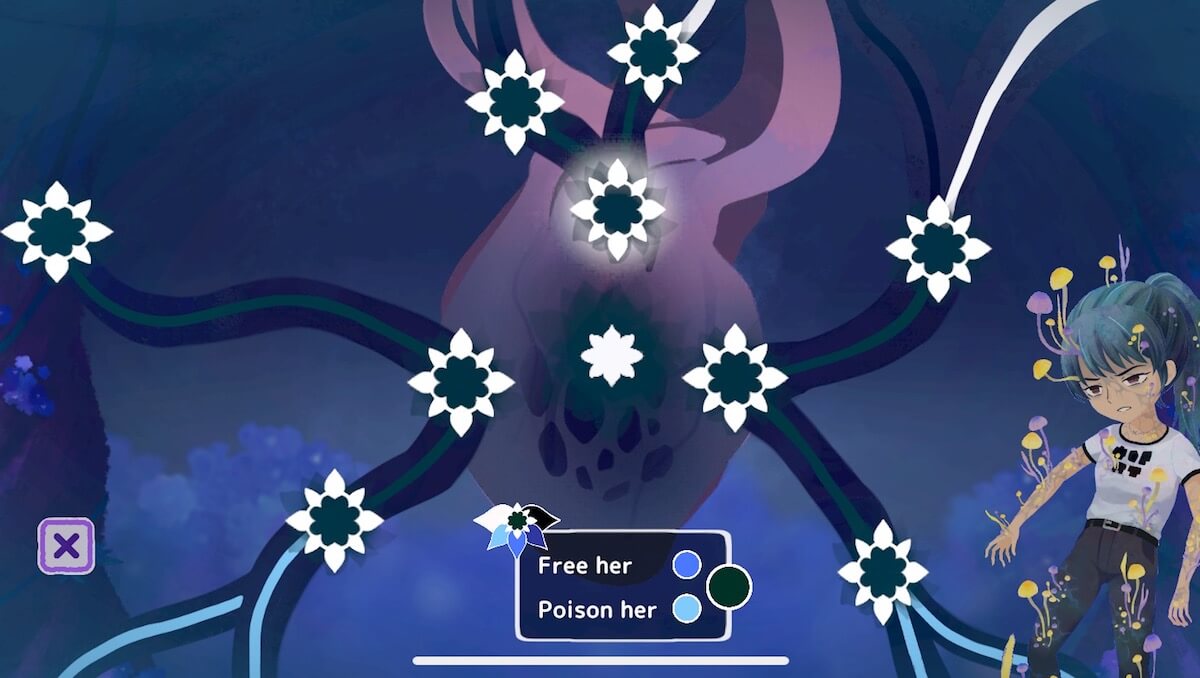 Also read about: The Fastest Way to Complete Your Research Level 10 Pokédex in Pokémon Legends: Arceus

In addition to the gentle story and its ever-changing nature, thanks to the karma system, the game is just beautiful in every respect. Especially outside of town, the world is painted in lush and stunning purples, blues and greens, giving it an otherworldly and magical feel. The character design is also sweet—especially the talking animals—and the way Flower changes throughout the day to show his deterioration is both heartbreaking and profound. And the music is just as pretty and vivid, incorporating traditional Japanese elements to tell this emotional story.

The environmental storytelling is also quite impressive. The more inquisitive you are, the more you'll understand Sumire, her town and her perspectives. As the story begins, she's meek, worried and unwilling to speak up for herself. She doesn't quite know the place in her small town, let alone the world, but all of that changes under the influence of Flower, who has only 24 hours to experience what she sees every day. The game also shares some interesting aspects of Japanese culture, which also shape Sumire's worldview. Every little deed, good and bad, culminates in a truly touching ending, and I wouldn't be surprised if it brings tears to some people's eyes.

In the end, this is a powerful story about the different ways that you can face tragedy and heartbreak in your own life—and a reminder to take control of your narrative, instead of just letting life happen to you. It makes you ask yourself whether you're bold enough to turn your entire life around in a single day, just by starting to live the life you want and be the person you want to be. That's a pretty impressive feat for a three-hour game, and I think it deserves to be played.

Sumire is available now on Steam and the Nintendo Switch for $9.99, and in the App Store for $5.99. It will be coming soon to Android as well.

Love heartwarming games? Click HERE to find out all of the reasons we loved last year's Chicory.