Zayanne Rifai Wants You To Fight Your Ignorance!

16-year-old Zayanne Rifai is the creative mind behind Fight Your Ignorance, an anti-bullying apparel company. The brand was inspired by her own personal experiences with bullying. 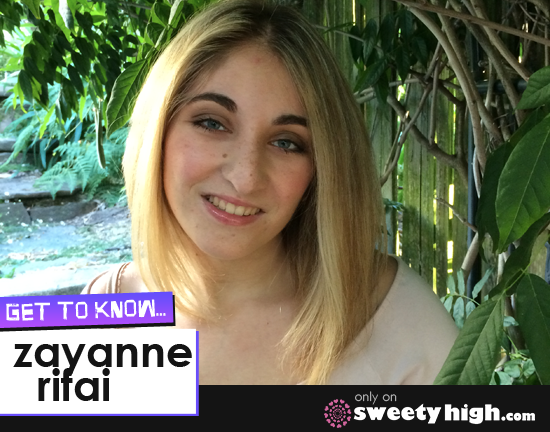 We recently spoke with Zayanne all about Fight Your Ignorance, why ending bullying is a cause so close to her heart, and her recent experiences with Cimorelli and Rocket21!

For Zayanne, the bullying started when she was just 5 years old. Even in kindergarten, she was picked on for being small.

"I was wearing toddler, 18-24 month, clothes in kindergarten," she explained. "And no, I never caught up. I just got chubby. I was at best shoulder height, but mostly chest height to my classmates. But I was loud."

Zayanne was never afraid to stand up to someone who had wronged her or someone she cared about. She spoke her mind about the situation.

"I think people assume I didn't have friends," she said. "Actually, I was in the popular group. These girls also liked me because I would stand up for  all of us when the other mean boys and girls would tease us."

Zayanne and her friends, who called themselves the "7 times great," would do talent shows together. They are still friends to this day.

But some were threatened by Zayanne's assertive nature. She was even bullied by her kindergarten teacher, which set the stage for other kids to think it was ok to treat her badly as well.

The situation escalated when Zayanne was in the 4th grade. She was bullied by a classmate, but when she would speak out against him, she was punished as well.

"I wrote a few letters to my principal protesting being in trouble for defending myself," she explained. "It was useless."

By middle school, Zayanne was sick and tired of being punished for speaking out against the bullies. She was lectured time and time again to just ignore the bullying, and even participated in anger management sessions with a new bully.

She decided to change her approach to the situation.

Zayanne was assigned a paper in English class, and she chose to write it about bullying. Her research led her to discover some of the horrible consequences bullying can have on people, including depression, loss of self esteem, body image issues and worse.

Her principal awarded her with an integrity award for her paper.

"Great, but then what?" Zayanne wondered.

The answer came in an unexpected form. When Zayanne entered high school, she was a little disappointed to discover she hadn't gotten all of the classes she wanted.

But her placement in a business class called BUILD was a blessing in disguise.

Ever since Zayanne was 3, she dreamed about creating her own business. She found herself oddly drawn to office supplies the paperwork her dad brought home from work.

"I was the easiest kid to buy birthday gifts for," she said. "Office supplies! For my 5th grade promotion I wrote about growing up and getting a business degree and opening up a non profit to help kids with my dad."

The class helped to set Zayanne up for success.

"You come up with a business plan and you have a business mentor and team," Zayanne explained. "But my team couldn't care less."

She suggested that the group create a line of t-shirts with anti-bullying messages.

"I chose t-shirts because they're like a moving poster," she said. "When you wear it you make a bold statement."

Zayanne and her team won three competitions with the idea. But when it was time to present the final showcase, only 2 of the 6 group members showed up. The team didn't win, but Zayanne was given the Most Valuable Professional Award for her work on the project.

Though she was recognized for her work, she wasn't convinced that her idea would thrive in the BUILD environment.

"I was invited to continue off campus," she said. "I didn't."

She decided to independently create her own line of anti-bullying apparel, which she called Fight Your Ignorance.

Zayanne was introduced to Rocket21 through her father, a CEO.

"If I have it right, he was showing my website to some people in his industry and they recommended that I be introduced to Rocket21," she said. "I liked the idea of that."

They approached her with the idea of running a contest to spread Fight Your Ignorance to a larger audience. It was a big change from her usual work, displaying her apparel at arts and crafts fairs at schools and community events.

"The contest had a slow start," Zayanne said. "The feedback was that kids were afraid that they would be the next target if they spoke up."

That changed when Rocket21 recruited the Cimorelli sisters to the campaign.

"They were very happy to do it," she said. "And after reading some of the mean things people come up with and post about them, I'm glad they agreed to do it. Great way to speak up. And they are super sweet!"

"He has been going to schools and working with kids about bully issues and writing songs about it with the students," she said. "He is probably the nicest person in the world and he was shocked at some of the things kids do to harass each other, including cyber-bullying."

There were hundreds of great entries, and some kids entered more than once. A student named Alyssa from Flushing, New York, won in the teen category.

"Flushing, New York was super exciting," she said. "The T-shirt is 'Put A Lid On Bullying,' with a picture of a trashcan, and the bad words are being closed with the lid into the trash can."

The shirt is now a part of the school's uniform!

"That's also the title of their anti-bully song, and it's super catchy," she said. "Alyssa is very sweet and awesome, and the event was very energetic and concert-like."

"'Think Twice Before You Post" was the winning slogan for Denver," she said.

The logo, created by a girl named Jess, included a laptop with the slogan on the screen. The song of the same name was also a big success, but Zayanne could tell bullying was a real issue at the school.

"The day we got there, we could tell this school was working hard to keep the kids safe, but they did have a huge bullying problem," Zayanne said.

The school had especially bad problems with fighting and cyberbullying.

"It was a mess and I was put to work, which was amazing and the most rewarding thing I have done since the time I started Fight Your Ignorance a month after my 15 birthday," she said.

The last conference, in Los Angeles, revealed another bullying issue. The slogan was "What Would You Do If It Was You", and the logo was a bully about to pounce on another kid.

"This school was very well-off and they had more of an exclusion issue," Zayanne explained. "They didn't seem too concerned or experienced in the world of bullies or bullying. The song was written by fewer kids, and they seemed to think of bullying as something that happens in movies."

However, the four boys who had come up with the logo knew what bullying was really about.

"They had been bullied and they expressed that very openly in their contest entries," she said. "Their song was addressing the bystander."

Overall, Zayanne said she loved working with Rocket21 and their contest. She hopes many more will enter their many Dream Big contests.

Zayanne reached out to Hall on Facebook. In the past he had spoken about his own experience with bullying.

"I just told him that I was proud that he would speak up about being bullied," she said. "He is a big, strong dude, and amazing at karate and for him to just say it out loud on TV blew my mind."

She sent him a link to her website and told him about the shirts she makes to speak out against bullying, and offered to give him a free shirt as a gift.

"He wanted to buy some," she said. "I couldn't accept, especially because he answered my chat. How cool is he?"

This year, Zayanne also plans to add more fashionable styles to Fight Your Ignorance, as well as sweatshirts, bags and hats.

When she can, Zayanne also likes to donate funds from her anti-bullying t-shirts to various organizations, such as the It Gets Better Project.

"I see myself sharing some donations with special needs groups in my next round of donations," she said. "I'm all about inclusion. Some of the sweetest kids I've met have had Down Syndrome"

She added that she believes an end can be put to bullying if more and more people continue to fight it.

"I do feel that bullying is becoming socially unacceptable," she said. "It will start fading and disappearing. Then, with a name like Fight Your ignorance I might decide to attack another subject. But I'm not done yet with bullies!"

Now that Zayanne is in the 11th grade, her bullying experiences seem to have stopped. She explained that her new school is full of nice kids with better things to do than be bullies.

"All I ask of kids out there is don't encourage bullies," she said. "They are very insecure people. Probably have been or are bullied themselves. They feed off the attention they get when you laugh at what they are saying. They like the audience."

She added that, by not sticking around and watching a bullying incident, you can help to not add fuel to the fire.

After all, bullies aren't born as bullies, she added.

"There are reasons behind it," Zayanne said. "Sometimes they were victims as well. Just as much as I want to end bullying for the bullied, I'd like to help save bullies from themselves and ignoring that bullying behavior is not the way to go."

Bullying has been allowed to continue because people were so passive about the subject for so long.

Some kids also record bullying on their cell phones. Zayanne advised never to post those videos online. Instead, they should be shown to a teacher or principal, who can help out.

"If you see that someone is getting bullied, no one expects you to jump in and be a hero," she said. "But tell someone. Run get help. Do something, and don't just be a bystander."

And if you suspect that someone is being bullied, whether it's online or in person, you should always alert an adult.

"If that adult tells you to ignore it because it's not your business, then go to another one and keep doing it until someone hears you," she said. "If you're being bullied tell someone."

If that doesn't work, Zayanne said she is willing to get involved.

To learn more and get in touch with Zayanne Rifai, check out her social media pages below! You can also join our no-bullying community at SweetyHigh.com, and hear more about the Dream Big To Prevent Bullying event here!