Curtis Harris is a young film and TV actor best known for his role as the ghost Miles Preston on the Nickelodeon series The Haunted Hathaways. 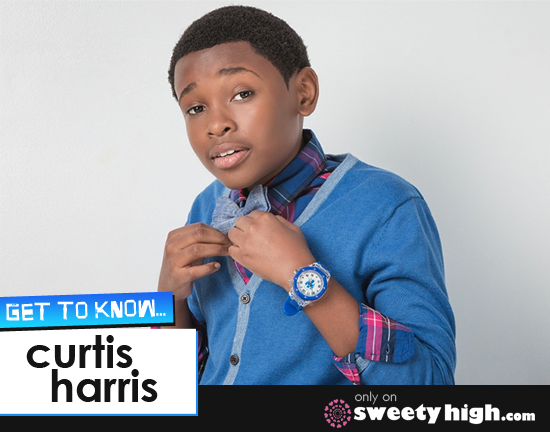 We recently spoke with Curtis all about the show and what it's like to play a ghost on TV, as well as his work with Nickelodeon for tomorrow's Earth Day celebrations!

Curtis said he was immediately drawn to the Haunted Hathways script.

"What I liked about the Haunted Hathaways script is it's a very funny, cool show, and it has a lot of great energy," he said.

He added that the show benefits from its incredible cast.

"It's so great because we bring a lot to the table," he said. "The script is like magic, and there literally is magic on the show. It's great for all families, all ages."

In the show, the Hathaway family, consisting of a mom and her two daughters, moves into a house that happens to be haunted by the ghosts of a dad and his two sons, the Prestons. Curtis plays Miles Preston.

"In the beginning, my brother and my dad, Louie and Ray, wanted to scare the family in their house, but now that we're into the show, they want to scare other people," Curtis said.

But Miles isn't quite like his dad and brother.

"He's the complete opposite," Curtis said. "He's like Casper. He's a very friendly ghost, he loves welcoming people in, and he's kind of quirky too. He wears bow ties, and he tells corny jokes, and he may need to work on his dance moves a little, but that's what makes Miles so funny and awesome."

Curtis explained that Miles differs from his ghostly family members because he has a different perspective on life.

"He sees more happiness, and be barely thinks of himself as a ghost," he said. "He's more like a regular person, and scaring people doesn't interest him. That's just who he is."

Curtis draw even some comparisons between himself and his onscreen counterpart.

"He kind of reminds me of me a little bit, because I'm a very caring person," he said. "I'm a prankster so I would pull pranks, but I'm not into scaring people."

If he were a ghost himself, he would use his powers to benefit others. He said he would also utilize them to make his own life easier.

"If I needed to clean the room or I needed to go someplace really fast, I could run really fast," he said. "I could poof right into a room, I could possess people. But I would definitely prank. If someone was getting on my nerves, I could get them to look really funny."

He would also love to use the power of invisibility.

"If I was a ghost that would be pretty awesome, because ghosts they don't just have one power," he said. "They have endless amounts of powers."

Curtis and the rest of the cast received the announcement that The Haunted Hathaways would be renewed for a second season while they were still filming the show's first season.

"It was pretty funny because the producer who came in after the run-through went upstairs with us, and I felt like it wasn't going to be great news. He said 'Guys, I have some news for you… Haunted Hathaways is getting picked up for a second season.'"

The cast was caught off guard but they were ecstatic!

"It was full of joy and happiness, and we were all really happy and excited to shoot the second season," he said.

He added that most shows don't know if they'll be renewed until the end of the season, and that it was great to know so early.

When we spoke with Curtis, he was on a brief hiatus from shooting the show's second season. He had just completed the season's second episode.

"We literally just started and we have a lot of fun, crazy stuff coming," he said. "It's very secretive right now, but I will tell you it's gonna be definitely bigger than the first season. The first season was pretty big, but the second season is going to be really awesome."

Curtis also joined some of his fellow Nickelodeon stars as a part of their Nickelodeon Get Dirty Earth Day initiative. By the way, Earth Day is tomorrow!

"We went to the L.A. Zoo and we did a bunch of really cool stuff," Curtis said. "We planted for the zoo. It was pretty fun because it was my first time actually digging up dirt and planting different leaves and plants and flowers."

He said it was also a lot of fun, because he got to work alongside Haunted Hathaways costar Amber Montana, as well as See Dad Run's Ryan Newman, Instant Mom's Sydney Park, and Kira Kosarin and Jack Griffo of The Thundermans!

"We had a great time and we got to spread the word about getting dirty and digging up the ground to plant plants," he said.

We are so excited to see what the second season of The Haunted Hathaways will have in store for fans!

For all of the latest on Curtis Harris, be sure to check out his social pages below. You should also join our community at SweetyHigh.com if you love The Haunted Hathaways!