Recently, I had my first bite of a delicious Lemon Lavender Ruby Jewel ice cream sandwich, and afterward, I simply couldn't stop thinking about it.

Not long afterward, I found out that they were also on the dessert menu of a local chain called Blazing Onion Burger Co. Guess who immediately headed over to try out their burgers and order a Ruby Jewel? It's safe to say I'm a bit obsessed with the brand, so I just had to reach out to them, and I was thoroughly delighted when they offered to send me a number of flavors of their ice cream sandwiches for review. And, after trying them all, I'm somehow even more infatuated with them.

Ruby Jewel is all about making scrumptious and indulgent ice cream sandwiches with the very best ingredients. Each one consists of soft, creamy ice cream sandwiched between two delicious cookies, with carefully chosen flavors that beautifully complement one another. Their cookies are made with real butter, while their ice cream is made with rBST-free milk and cream, with every product made right here in the U.S.

Ruby Jewel ice cream sandwiches can be purchased online in 10-packs of single flavors or variety packs for between $39 and $49 each—though it costs quite a bit extra to ship them because they come frozen. You can also click HERE to find out if they're available in a store near you. Here are the brand's flavors I've tried—so far—and here's what I thought of them.

Also read about: Want to Up Your Lunch Game? Try One of These Great Lunchboxes for Teens

Lemon Lavender is the Ruby Jewel flavor that started it all for me—and even after trying five other flavors, I still think this is the gold standard. When I first read the back of the bag, I thought it was funny that it said to "let it soften for approximately 3 minutes and 47 seconds at 72°" before I dug in, but I listened, and I truly believe it enhanced every aspect of the sandwich. From here on out, I'd make sure to do so with every sandwich I tried.

The lemon cookie on the outside was soft, with all of the zesty lemon flavor you could want, while the honey lavender ice cream inside was sweet, creamy and flavored with just the right hint of floral lavender flavor to pair beautifully with the cookie without being overpowering. Every bite has a bright, refreshing taste—and while I could absolutely scarf down this whole thing all at once, it's also quite sizeable, and perfect for splitting in two and sharing with a loved one. Believe us—they'll like you even better when you share one of these with them. 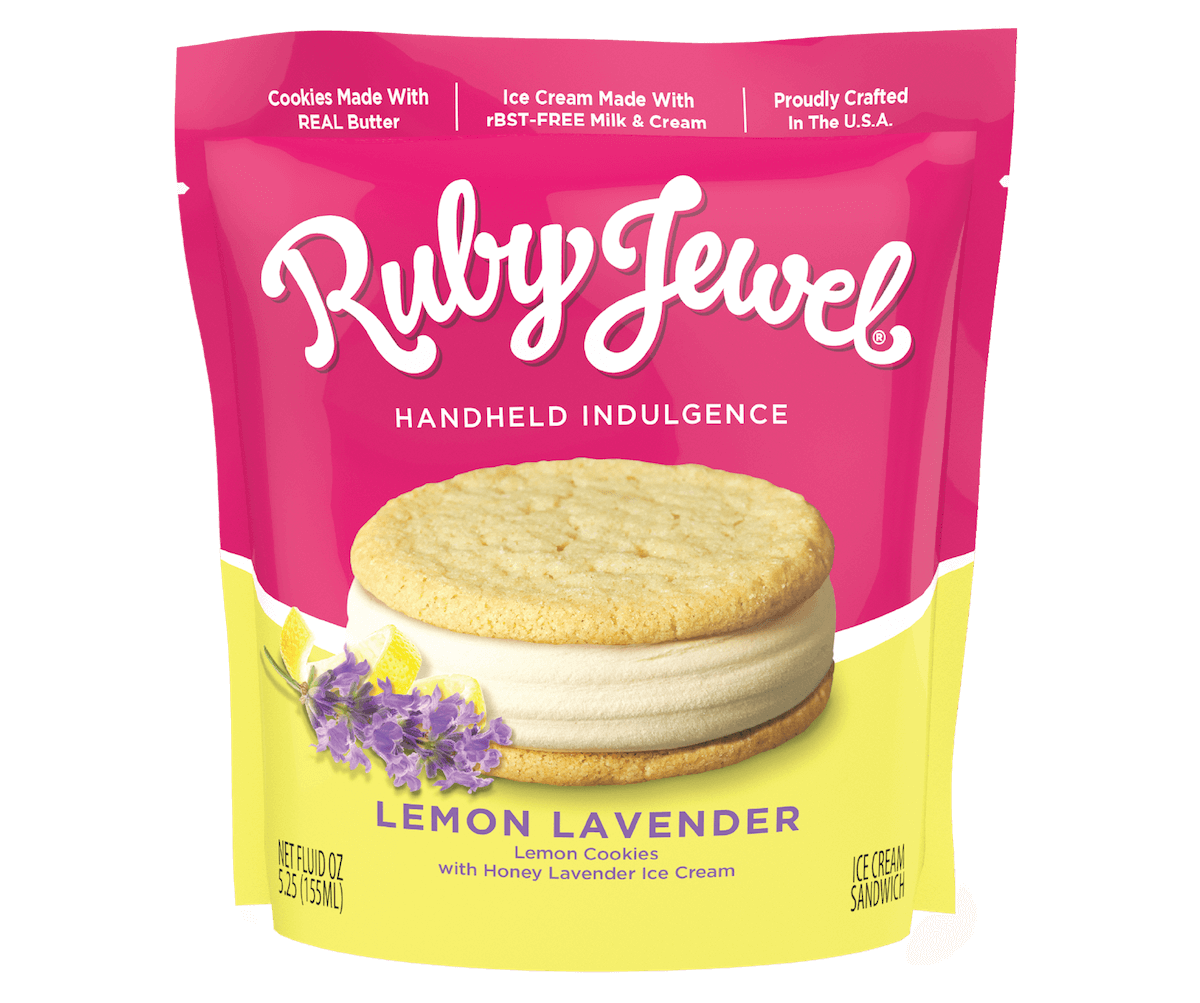 Since my first batch of Ruby Jewel sandwiches was sent at the start of fall, they sent me a whole box of seasonal Pumpkin Ginger sandwiches, and after allowing the sandwich to soften, it was love at first bite. The ginger cookies on the outside of this sandwich are delicious, like a soft, spicy version of your favorite gingerbread, and it went perfectly with the ice cream inside. The pumpkin ice cream has all of the elements of the classic PSL, including real pumpkin and all of your favorite pumpkin spices, but at a level that's subdued, so it works with the ginger instead of overwhelming it. Believe me when I say my family made quick work of the five Pumpkin Ginger sandwiches I was sent. 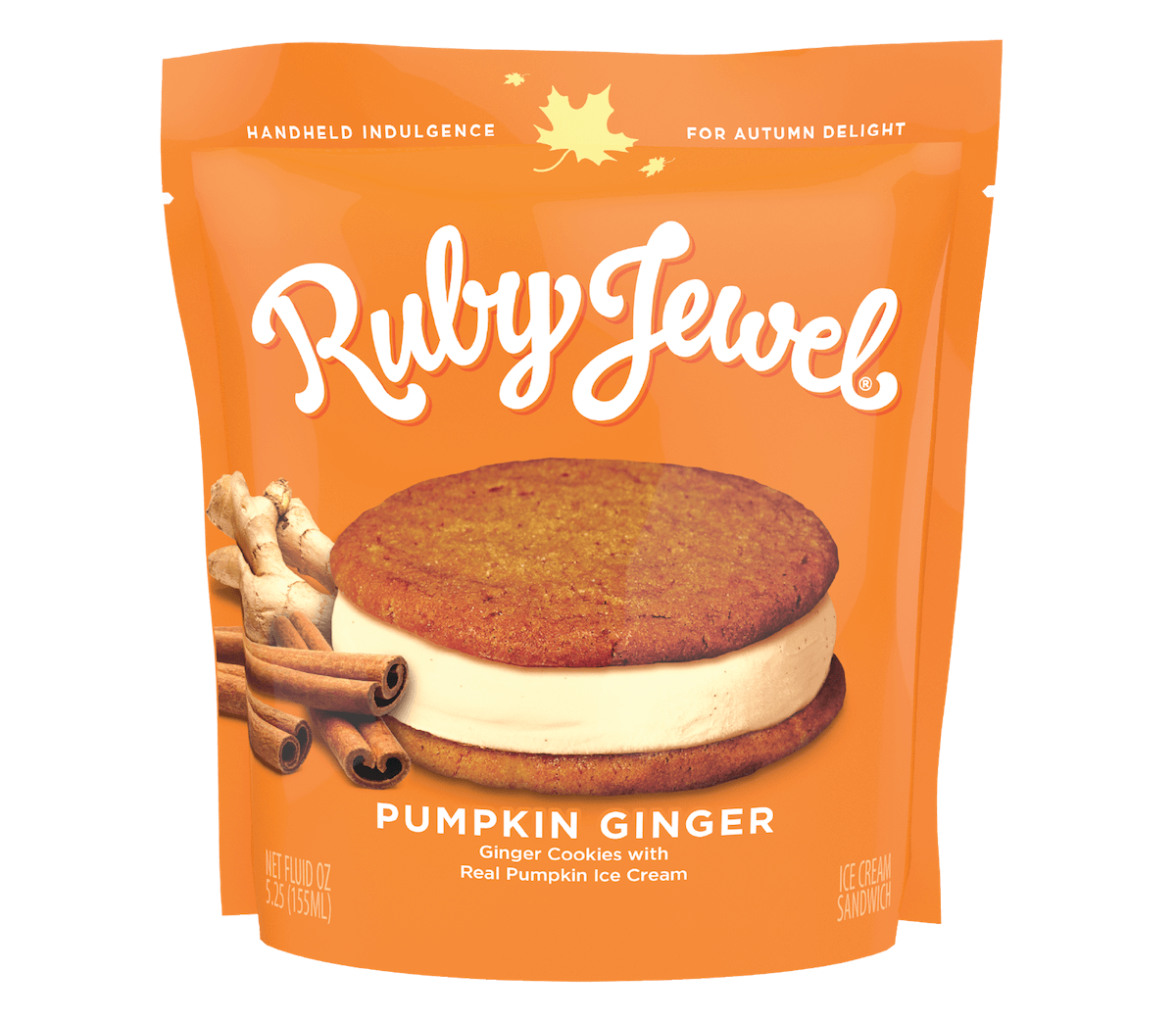 Next up was another festive and seasonal flavor, combining peppermint and chocolate to evoke the upcoming holidays, and it was also completely irresistible. This one featured double chocolate chip cookies, embedded with peppermint, and all of that rich chocolate made for an absolutely scrumptious cookie. The peppermint ice cream also had just the right amount of minty flavor to give it that holiday flair, without making it taste like toothpaste. If you love all things mint, I don't doubt this will become a fast favorite. 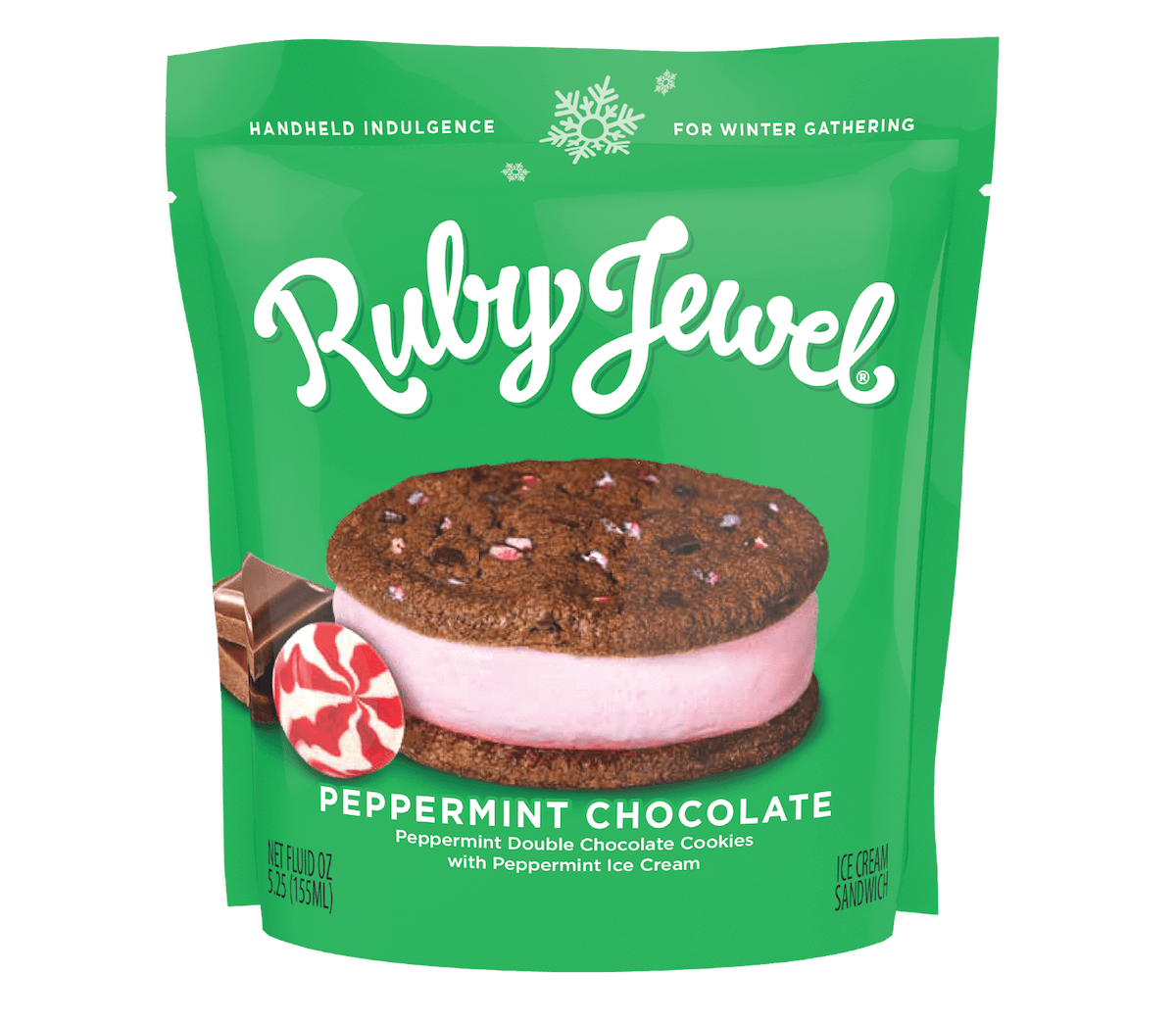 After trying all kinds of fancy and unusual flavors from Ruby Jewel, I wondered how their basic "The Classic" sandwich would stack up. I shouldn't have been too surprised that it was exceedingly good. Of all of the flavors I tried, the chocolate chip cookie in this sandwich had the most bite, and a little bit of crunch, but I think that texture worked extremely well here, especially alongside the standard but delicious vanilla ice cream. This one is sure to satisfy picky eaters, and even if it's not as exciting as some of the other flavors, it's just as worthy. 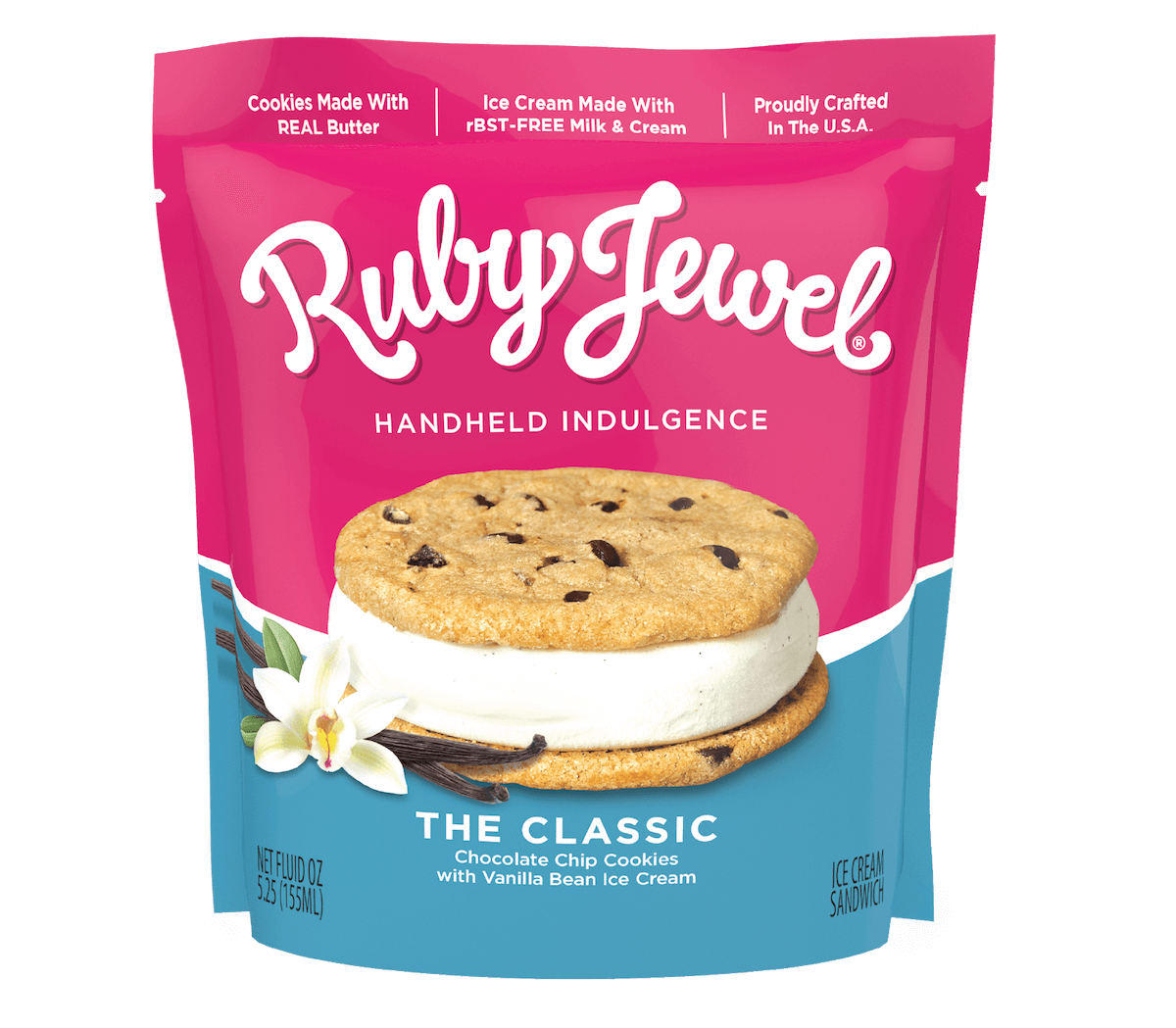 Strawberry is another flavor that might sound dull on the surface, but once I actually bit in, I discovered that this was among my very top flavors. That's almost entirely due to the brown sugar cookies that sandwich the strawberry ice cream. They're chewy, sweet and rich, and I could eat them all day long. The strawberry flavor is pretty mellow, so if you wanted strong, tart berry flavor coming in, you might be disappointed, but I think it's just right with the brown sugar—and I'm really happy a couple of local shops carry it. 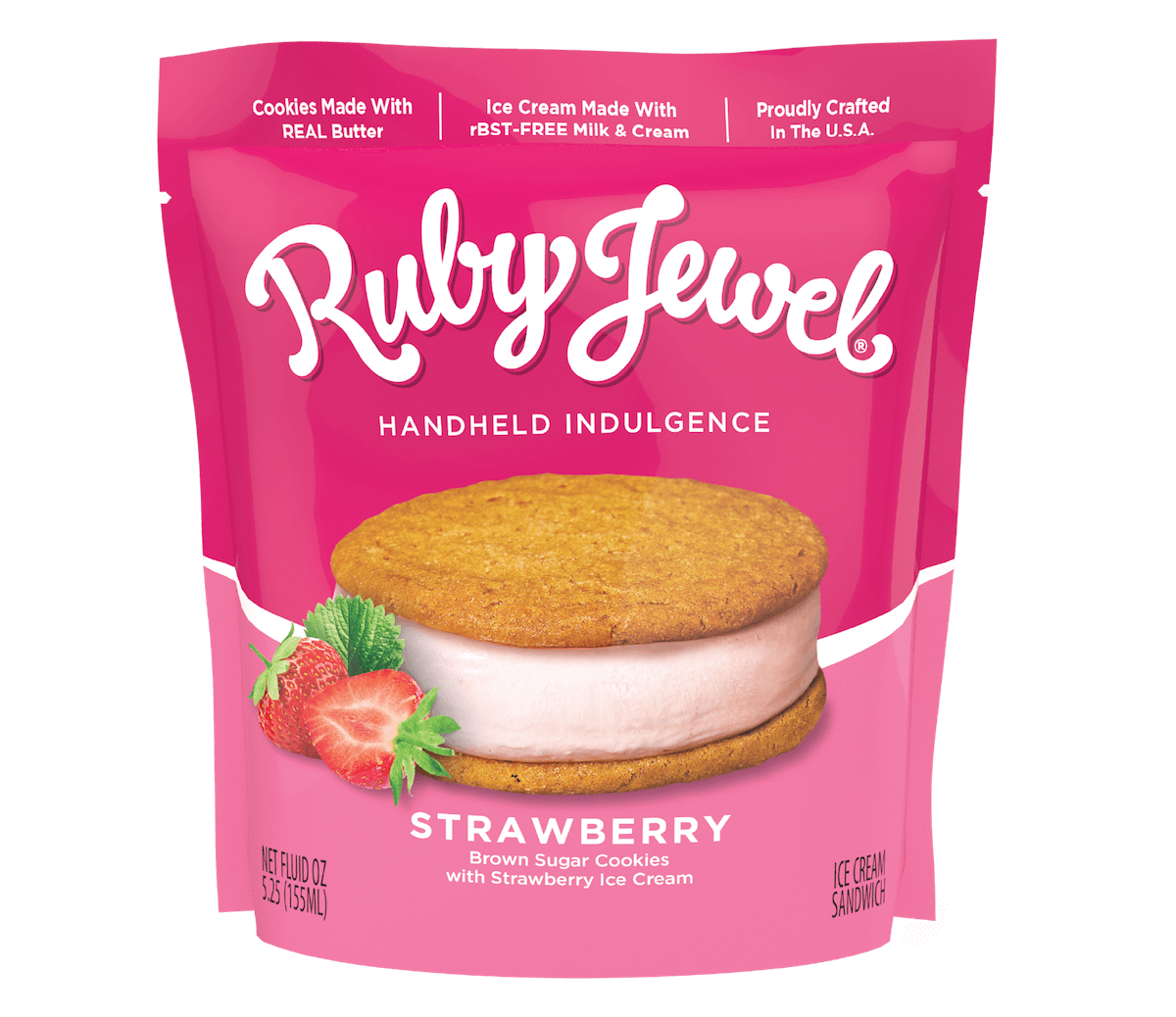 The Salted Caramel flavor intrigued me the most, so I saved it for last in my first taste test, and I was thrilled when it was finally time to take a bite. The double chocolate chip cookie is everything you'd want from a soft, delicious chocolatey confection, and the salted caramel inside has the perfect balance of salt and buttery sweetness to really make all of those flavors sing. This was the one we probably scarfed down the fastest, and while the Lemon Lavender still has to be my favorite, this one comes in at a close second. 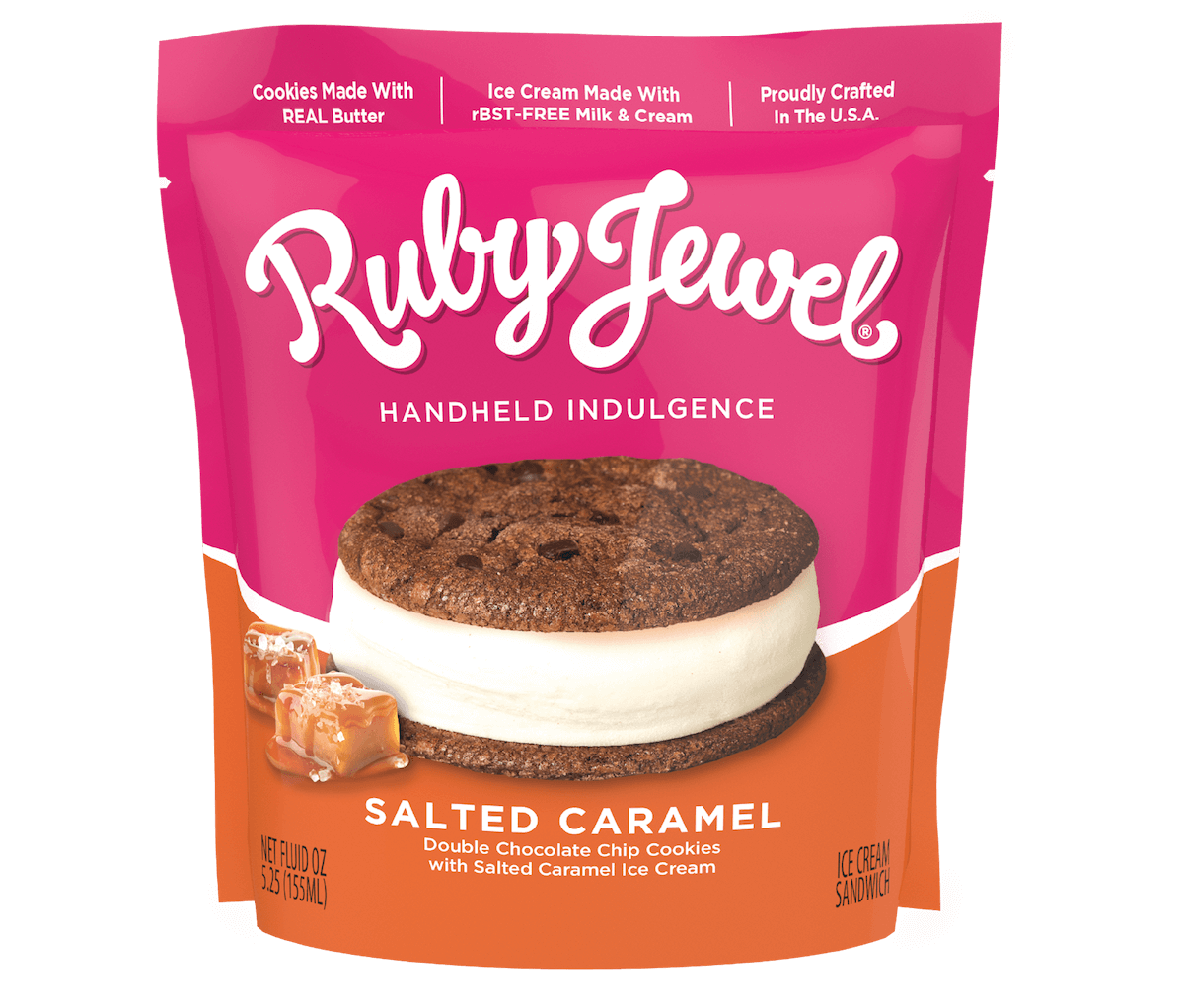 Confession time—I don't really like chocolate ice cream. I usually find it a bit rich and overwhelming, and in almost every instance, I'd rather have vanilla. I thought this Triple Chocolate Ruby Jewel ice cream sandwich might fall in ranking because it's packed with chocolate ice cream, but somehow, they made the chocolate-on-chocolate-on-chocolate sandwich work for me. The double chocolate chip cookies are the same luscious ones from the Salted Caramel sandwich, and together, the flavors are ridiculously smooth and together cravable. 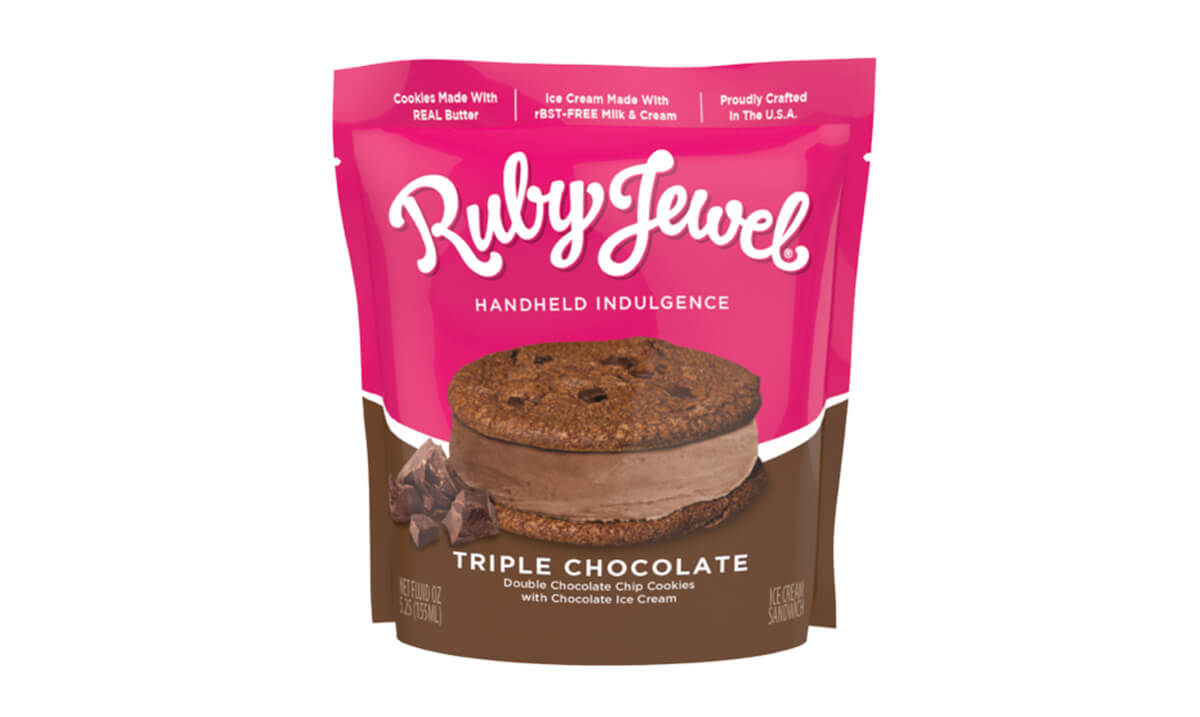 If you like the double chocolate chip cookies of the Salted Caramel and Triple Chocolate sandwiches, you're in luck, because it's back for this delectable PB Chocolate ice cream sandwich. The peanut butter ice cream in this one has such a smooth, light peanut butter flavor that, paired with the cookie, it'll remind you of your favorite peanut butter cup and get gobbled down in no time. 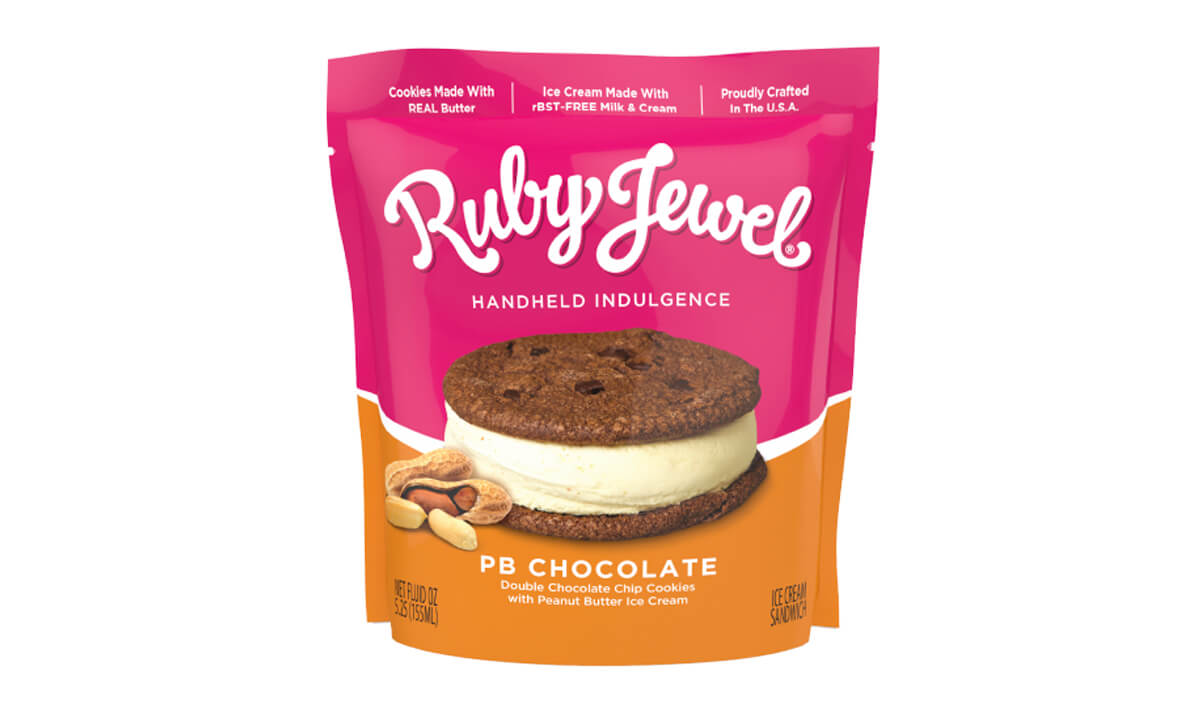 Last, but definitely not least, is the Campfire S'mores Flavor. While the chocolatey cookies were familiar, adding sweet marshmallows was a welcome twist, but I have to say that the star of the show in this incredible ice cream sandwich is the honey graham cracker-flavored ice cream. It's a little sweet, a little salty and tastes just like a graham cracker, making for authentic s'mores goodness in literally every bite. 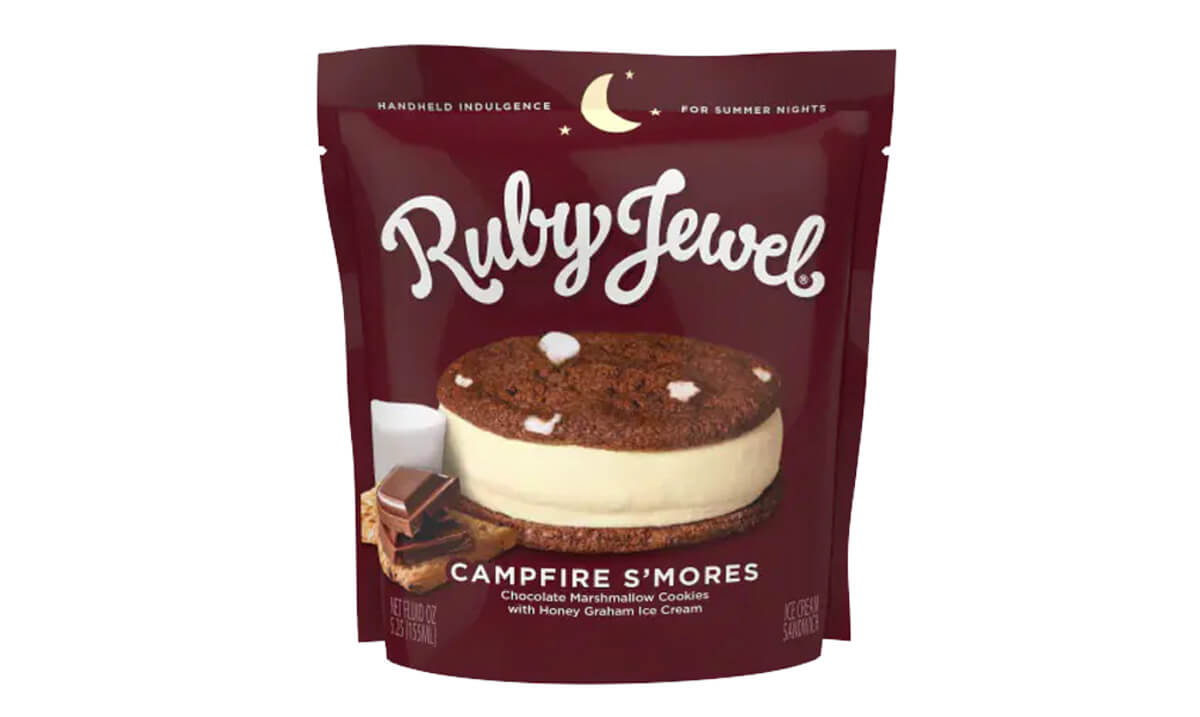 Imagine some of the tastiest, softest cookies you've ever had, layer them with the best ice creams, and you've got Ruby Jewel. After introducing them to my family, they basically buy up the whole stock whenever we visit the local stores that carry them. They're that good. And though the prices may be a little high—usually between $4 and $5 near me—I wouldn't second-guess paying that for one of these at all. It might be a different matter if you're ordering online and also have to pay to ship—but depending on your budget, that might be entirely worth it, too, and I'm certainly considering it to try the flavors I haven't been able to get my hands on yet.

Curious about premium mochi ice cream? Click HERE to find out why Mochidoki needs to be on your radar.