Since the group's debut in 2015, SEVENTEEN has become one of the biggest names in K-pop.

Their music has been streamed over 2 billion times on Spotify alone, and later this year they plan to embark on their [BE THE SUN] World Tour, which will take the superstars across the globe. We were more than excited to speak with the group about their newest album release, [Face The Sun], as well as give them the chance to answer some fan questions from their beloved CARATs.

How does this album connect to your other projects and the story that you're telling? What songs are each of you most excited about on the album?

JOSHUA: Face the Sun is an album about rising above our fears. It closely follows our thoughts and feelings in facing fears and concerns. We want our listeners to become a part of the journey to courage. I hope it reminds you that these "inner shadows" are a part of everyone's story, so that we can build the courage to conquer our fears together.

SEUNGKWAN: I can't reveal the setlist yet, but I'm most excited about the tracks we will be performing on stage during the upcoming world tour. I can't wait to present the performances we have planned for the tracks.

DINO: My favorite is "DON QUIXOTE." I find the character of Don Quixote relatable, and the song itself always fills me up with courage.

HOSHI: I've been telling everyone that "Ash" is my absolute favorite. It's a new style for us which, I think, is fitting for this new chapter in SEVENTEEN's story. 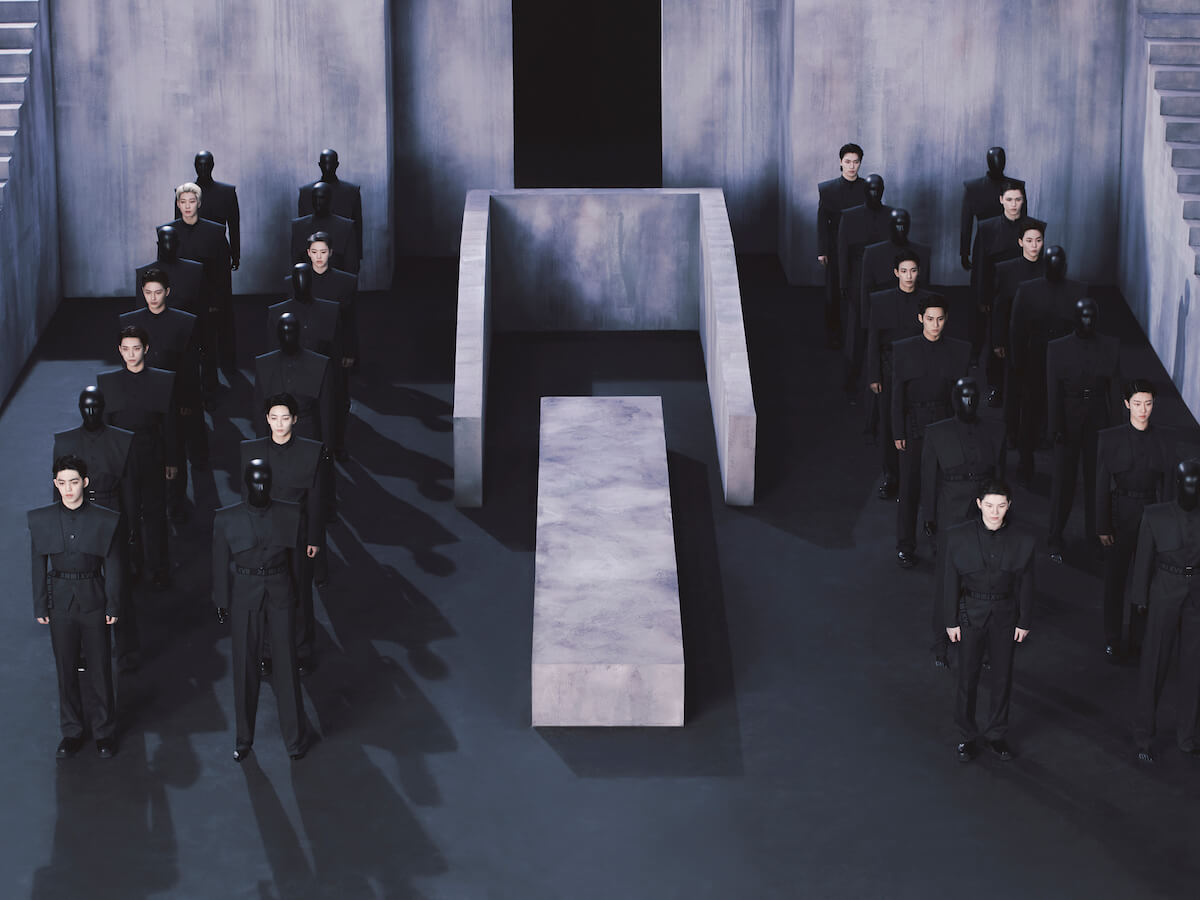 SH: What new side of SEVENTEEN can fans expect to see on the album? Are you ever afraid of trying something new or taking a new approach?

SEUNGKWAN: Face the Sun was a new challenge for us in a sense that we candidly discuss our vulnerabilities through the album. I think our members in general are keen on taking on new challenges. We're very eager to become better versions of ourselves, and it's much less scary to tackle a challenge when the 13 of us are together. There is always something new happening in the team because once one member starts learning something new, a few other members also tend to follow.

@vindicatedtruth asked: What made you decide to explore your fears and shadows for your fourth studio album?

WOOZI: The past two years have been some of the most difficult times for all of us. For SEVENTEEN specifically, it was time to face a lot of fears we've previously avoided, namely the idea of not being able to perform in front of a live audience again. Face the Sun is a record of our determination and resolution not to be dragged down by these fears. 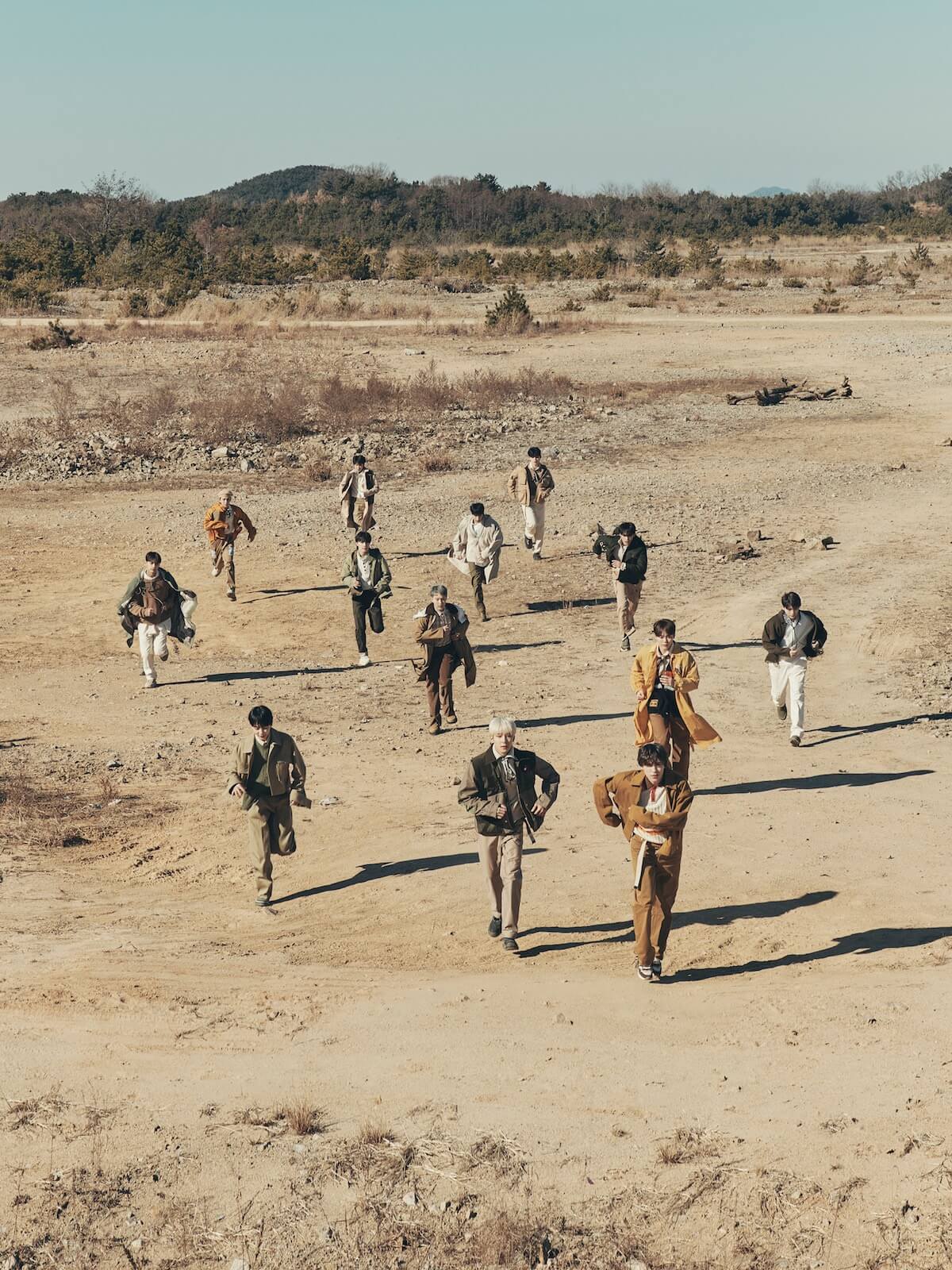 SH: What was the inspiration behind "Darl+ing" What made you feel that it was the right song to release first?

VERNON: "Darl+ing" was the starting point of a new chapter for SEVENTEEN. At this point in time, an important goal of ours is to build a stronger connection with our listeners. Since "Darl+ing" is a song that expresses our appreciation for everyone that sends love our way and supports us, we thought it was a great way to start strengthening that connection. The next step on this path is our world tour [BE THE SUN].

SH: SEVENTEEN is a group well-known for their self-production.What part of your process do you put the most thought into?

WONWOO: With each of our strengths being different, we have different focus areas in the production process. Some members put more thought into penning the lyrics, and others place greater emphasis on perfecting the choreography. So we work well as a team. Even with different focus areas, we share the goal of delivering the message intended for the song through the best possible music and performance.

SH: Almost seven years after your debut, do you still get nervous or stage fright? How do you overcome it?

HOSHI: The excitement of performing in front of a live audience far outweighs the nervousness. Especially over the past two years, we missed being on stage far too much. Our world tour is starting soon. I think there will be moments of anxiety or stress as we get closer to the date, but we're really just counting down the days because we know how ecstatic we will be when the moment hits. We are the best versions of ourselves on stage, so we hope everyone is looking forward to SEVENTEEN's show. 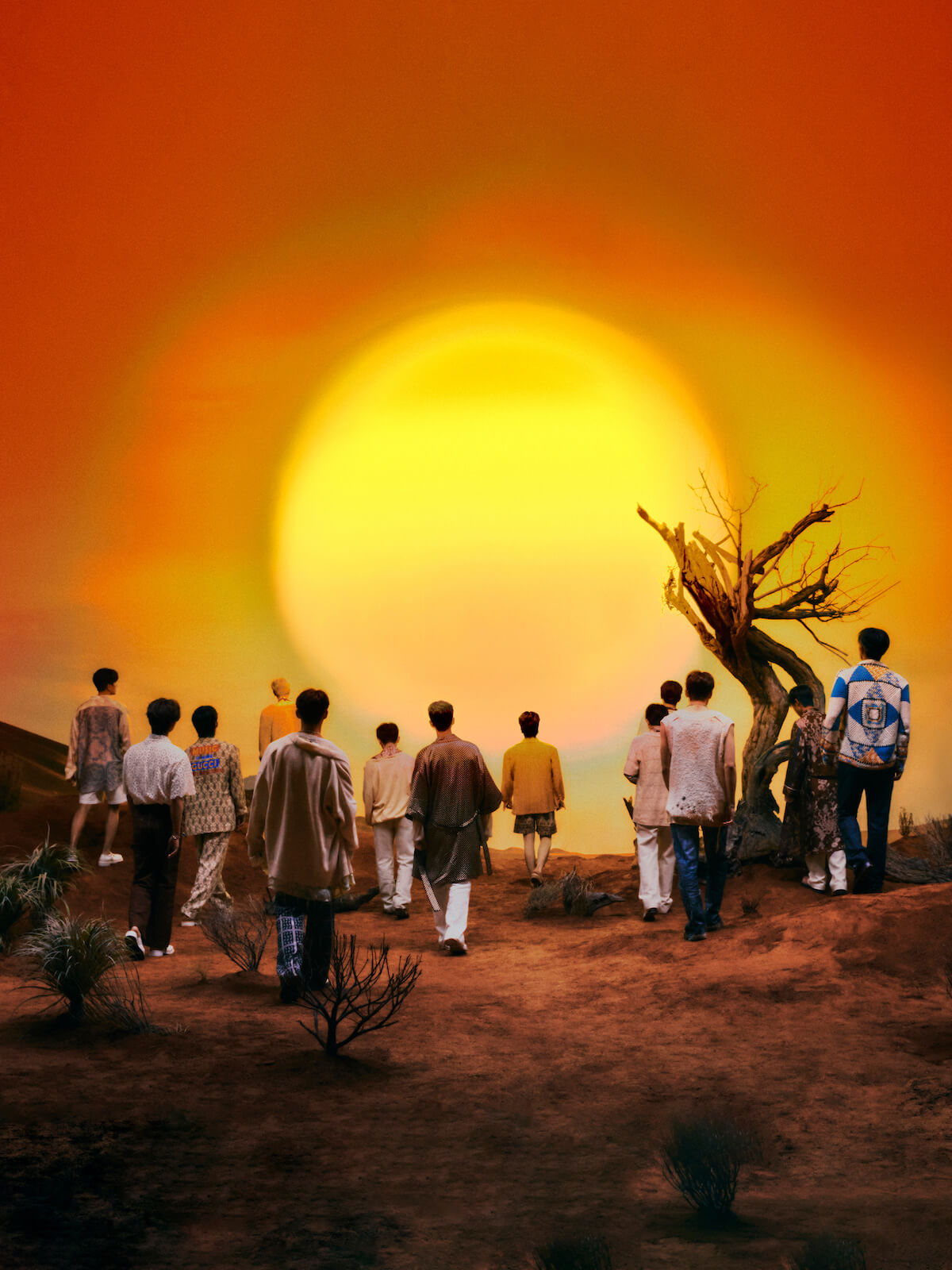 SH: What is it that makes you feel the most connected to your fanbase, CARAT?

JEONGHAN: I personally feel most connected when I realize how much I've grown and changed by CARATs. They are an integral part of who SEVENTEEN are today.

DK: It has to be when I hear them cheer for us during a show. When we're rehearsing for concerts without an audience, it gets exhausting to the point we wonder "Are we actually going to make it through the full show?" When our fans are there, we might be out of breath and be on the verge of passing out, but the fan chants and the cheers tap into this whole new source of energy I didn't think I had.

DINO: There are times I feel like CARATs know us better than we know ourselves. They notice every minor change in gesture for a performance, ones that I myself might not even remember changing. Even when we post something on our fan community at 3 or 4 in the morning, CARATs are always there to talk to us. It's not something we can take for granted, and we want to ensure we return the same amount of love.

JEONGHAN: CARATs have always been the reason why I want to improve myself. I personally feel most connected to them when I look back at how much I have changed and grown over the years, and realize I was only able to do so because of our fans. They are an integral part of who I am, and who SEVENTEEN are today.

THE 8: JUN spends a lot of time on his phone. He always has it with him and he also takes a lot of selfies. SEUNGKWAN is another member who is on social media often, always monitoring how our fans are responding to new music, performances and content from us. He just has a lot of interest in what else is happening around the world in general, and stays in touch with a lot of people.

Also read about: K-pop Band BLANK2Y Dishes on Their Debut With K2Y I : CONFIDENCE [Thumbs Up]

@jhoonlver asked: Being together for almost seven years, what are some troubles you guys have experienced with each other and how do you resolve them?

S.COUPS: We run into minor disagreements all the time. I wouldn't call them "troubles" though, because I believe the fact that we have different opinions and that we are able to speak to each other openly is what keeps our team strong. We've learned to talk through any disagreement we might have, which is only possible because we trust that we are all looking towards the same goals and direction. We always want to create the best possible work, and we want to do it well together.

JUN: Our team tends to be loud and talkative everywhere—on stage, behind the stage, in our practice room, at home. Our conversations are endless, and arguments over the most trivial things are a part of that. I think the nature of our relationship has also added depth to what we can do together on the stage. 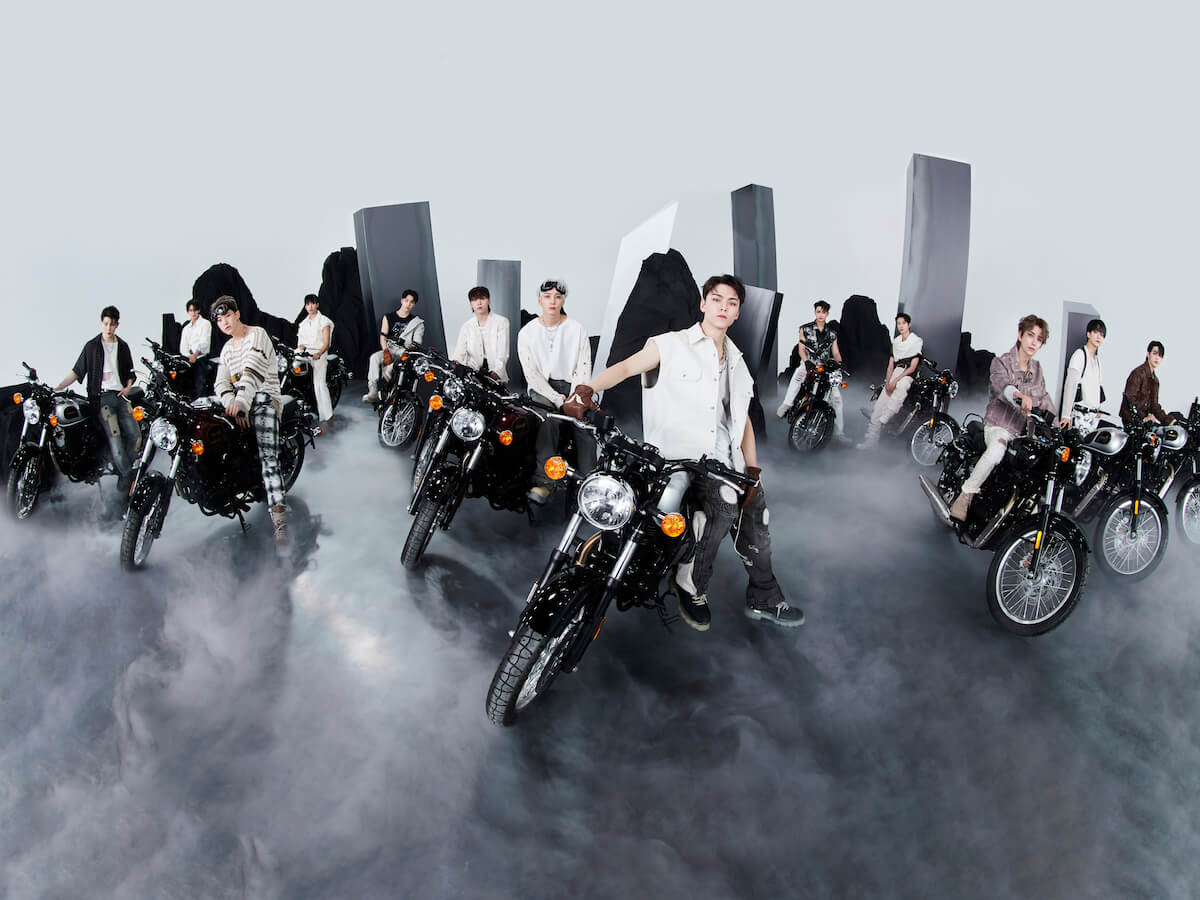 SH: If you could go back in time to your debut, what is something you would say to your past self?

MINGYU: There isn't anything special that I would say to my past self. We've been through so much since our debut, from happiness and excitement to disappointment and sadness. But everything I've experienced is of value to me and is a part of who I am today, and I'm proud of who we are. Rather than telling myself back then to do things a certain way, I would leave myself to take in all that I face, and I think I'll be back where I am now.

Need more K-pop interviews? Click HERE to read about our chat with ONEUS on their TRICKSTER mini album.