The 13 Funniest Classic Comedies Every Teen Should See

Need a good laugh? There's no better place to seek one than a great comedy film, and lucky for all of us, the options are pretty much endless.

Of course, no one wants to waste their time watching a dud, so when you're in the mood for a chuckle, it's best to turn to the classics. If you're not sure where to start, here's a list of the funniest comedy movies—both new and old—for teens in the mood to crack up.

For a '90s comedy that's also sure to pull on your heartstrings, you really can't do better than Mrs. Doubtfire. It stars the inimitable Robin Wiliams as a dad and actor in the middle of a messy divorce. When his split means losing custody of his kids, he decides he'll go to any length to see them, deciding to disguise himself as a nanny to fool his ex and spend time with the children he adores. It's highly unethical, but heartfelt nonetheless, with shenanigans only getting more and more outlandish as his act starts to fall apart at the seams. 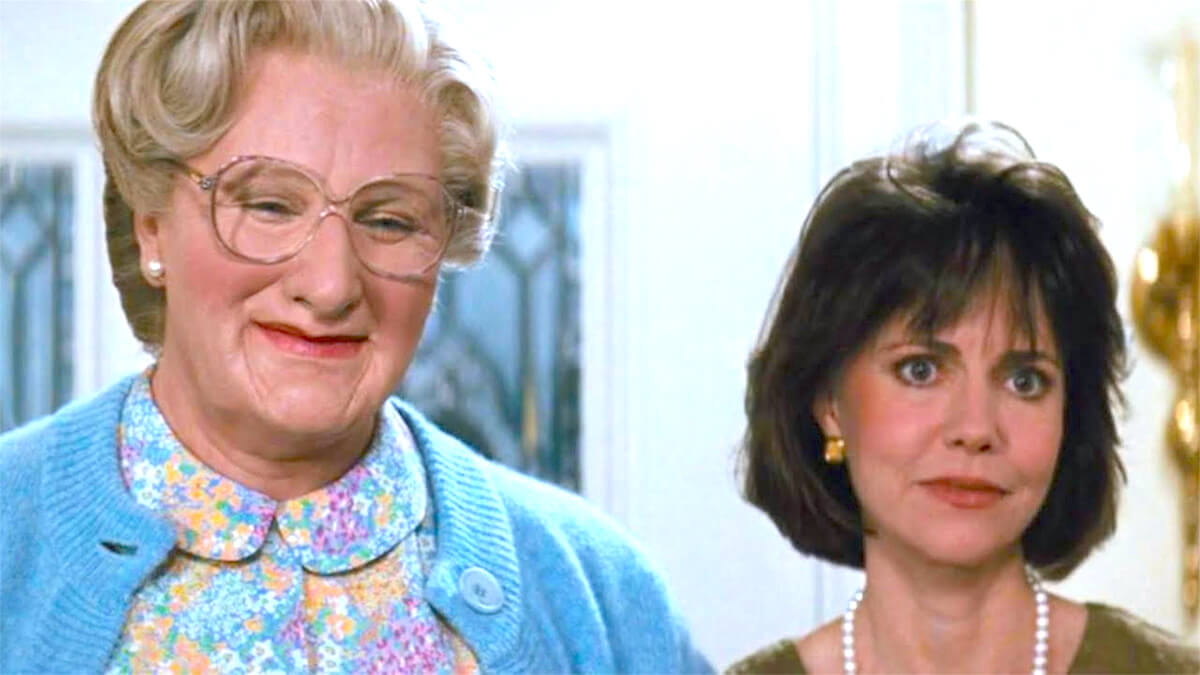 We love comedies that are also ridiculously empowering, and Legally Blonde shows us to look past all of the stereotypes and remind us all that we have untapped potential. It stars Reese Witherspoon as Elle Woods, who gets dumped by her boyfriend for not being "serious" enough for his political aspirations. To win him back, she follows him to Harvard to become a lawyer, discovering her own abilities—and what really matters—in the process and becoming one of the best lawyers in the biz. 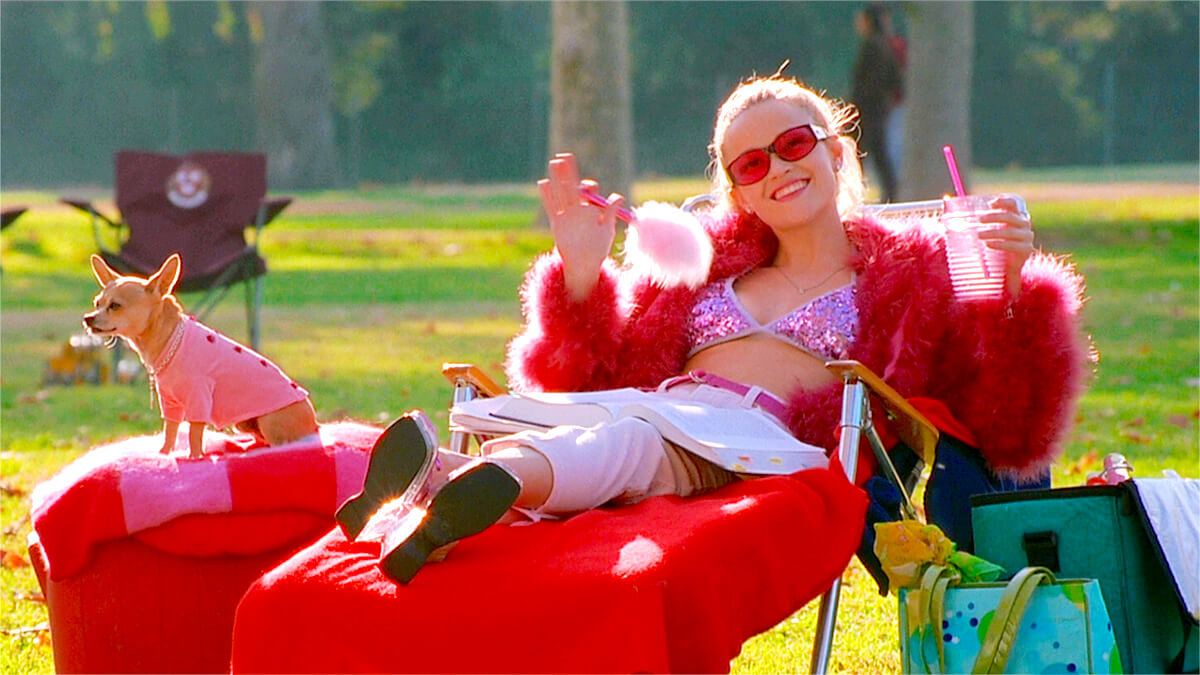 Also read about: 12 Thrilling Movies for Teens Who Love a Good Mystery

Before Adam Sandler was one of the biggest comedy stars in the world, he had some serious gems in the '90s, with Happy Gilmore being the funniest of them all. He stars as the titular Happy, a hockey player with a mean swing and a penchant for violence, who discovers he can hit a golf ball farther than anyone else in the game. When his beloved grandmother loses her home to debt collectors, he teams up with a one-handed former golf pro to hone his golf skills, win some games and buy it back, but will his outrageous persona ever be a match for the quiet, patient game of golf? 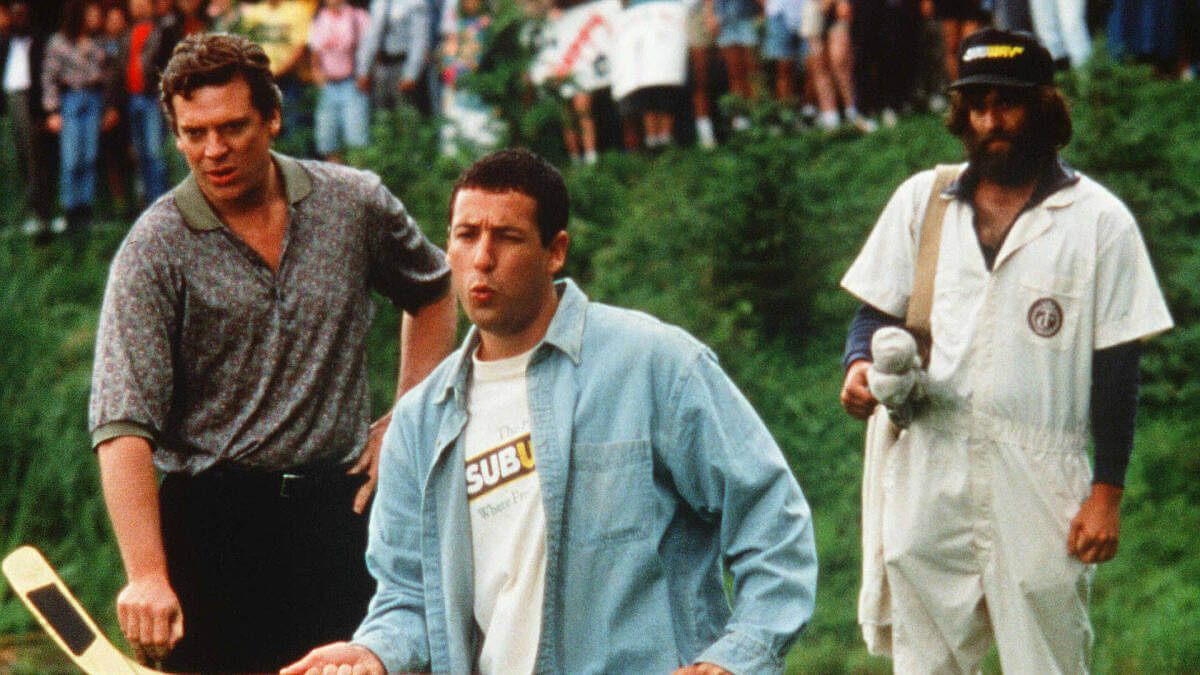 Airplane! is widely regarded as one of the greatest classic comedies of all time, but Top Secret!, made by the same writing and directing team, is its lesser-known successor—and we happen to think it's even funnier. It stars Val Kilmer as Nick Rivers, a rock star akin to Elvis, who's recruited to become a spy for the United States as he goes on tour in East Germany. It's tough to explain, but this film leans fully into silliness at every opportunity, with some of the best visual gags we've ever seen, and if you love comedy, you have to add this one to your watch list. 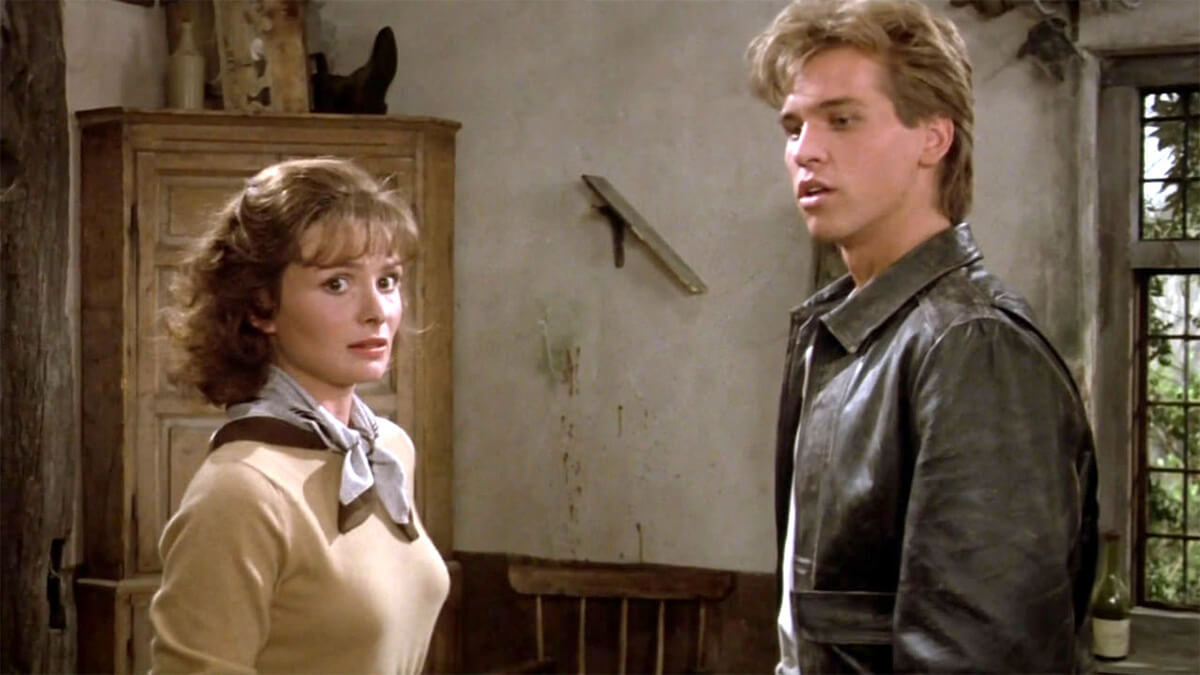 If you like your comedies on the romantic side, you really can't do better than When Harry Met Sally… Its leads, Billy Crystal and Meg Ryan, make for one of the most enchanting will-they-won't-they couples of all time, with the characters meeting just after college graduation and reuniting at different points in their life, and their friendship (and chemistry) growing over the years. This is one that will enrapture even those who say they can't stand rom-coms, with some of the most quotable lines and iconic scenes in cinema. 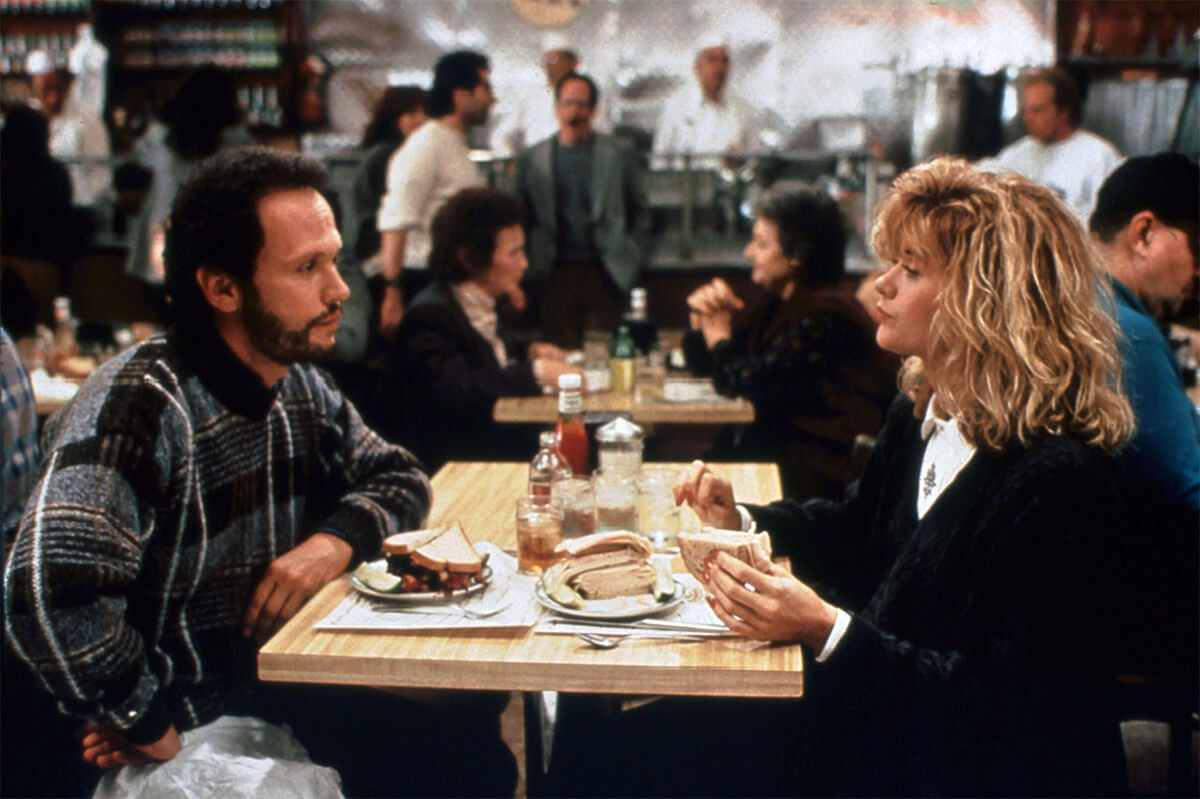 Also read about: 15 Sad Netflix Movies for Teens Who Need a Good Cry

Even if you've never worked in an office, there's something viscerally relatable about Office Space. It's about a programmer trudging through life with one of the most soul-numbing office jobs imaginable, until one day while seeing a hypnotist, he's coaxed into a state of no longer caring and worrying about any of it. When the hypnotist dies suddenly during the session, he's left in that carefree state permanently—and strangely, when he gives up at work and starts speaking his mind, everything starts going right for him. When he hears that the company is about to be "downsized," he decides to team up with two co-workers to rip off the company and get his revenge. 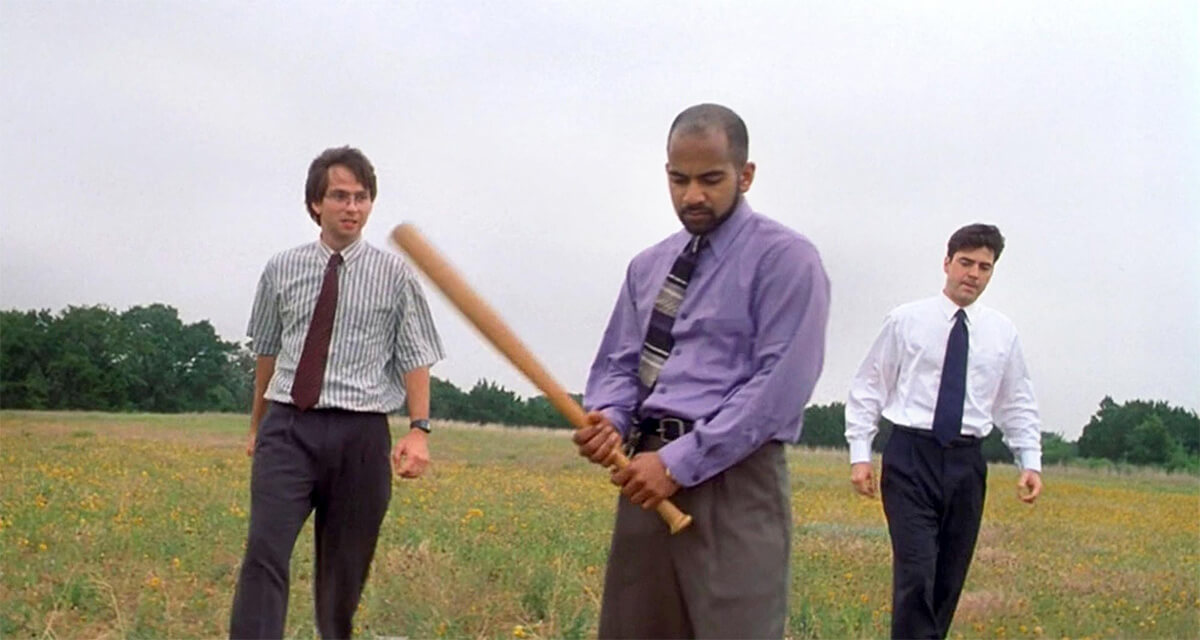 Ever wished you could skip the growing-up stuff and get right to being an adult? That's precisely what happens in Big, starring Tom Hanks. After 12-year-old Josh makes a wish on a fortune-telling machine, he wakes up the next morning in the body of an adult. Josh is forced to leave home and find his way in the world, dealing with adulthood for the first time through the eyes of a kid. Though his childlike sense of wonder does help him succeed in the adult world, he realizes that being a grown-up isn't all it's chalked up to be, providing a valuable message for kids and adults alike, while being seriously funny. 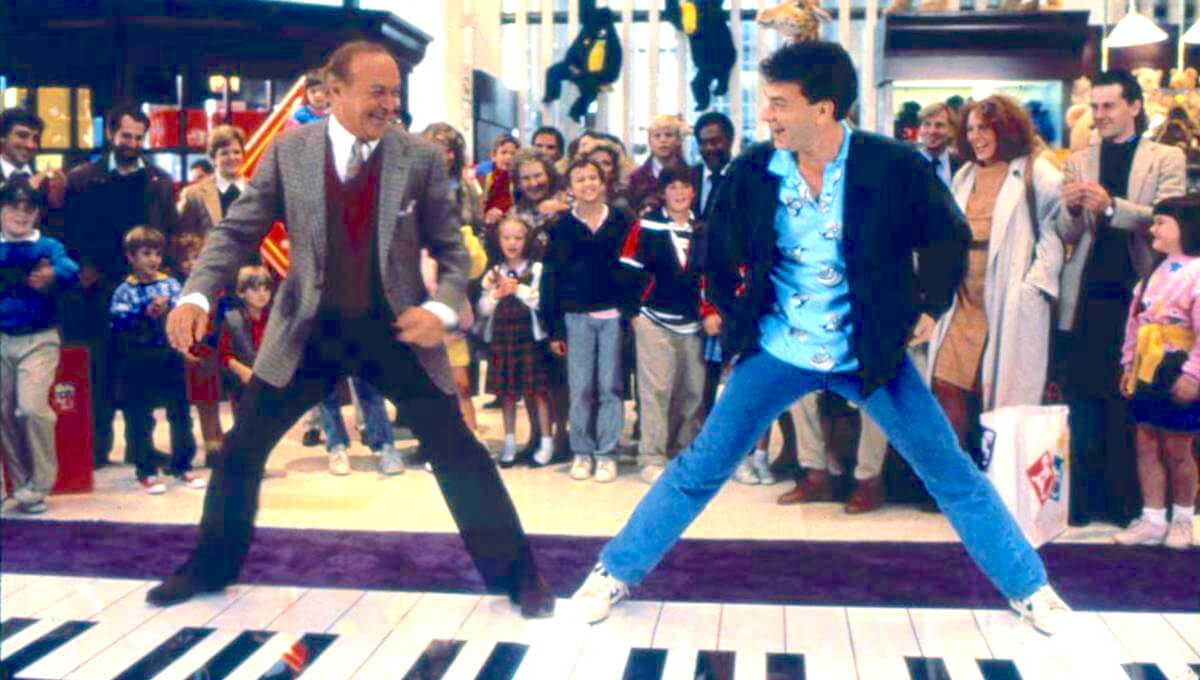 While Ghostbusters definitely has horror elements, it's a comedy through and through, with some of the time's top comedic talent to create something utterly timeless. It's about three paranormal scientists, played by Harold Ramis, Bill Murray and Dan Aykroyd, who encounter a real ghost for the first time, which unfortunately only leads to them losing their comfortable university jobs. Soon, the trio decides to channel their knowledge into hunting ghosts, hiring a fourth member to keep up with popular demand, before they discover a gate to another dimension that puts the entire city at risk. The result is a flick that never stops entertaining, with one-liners that are still quoted decades later. 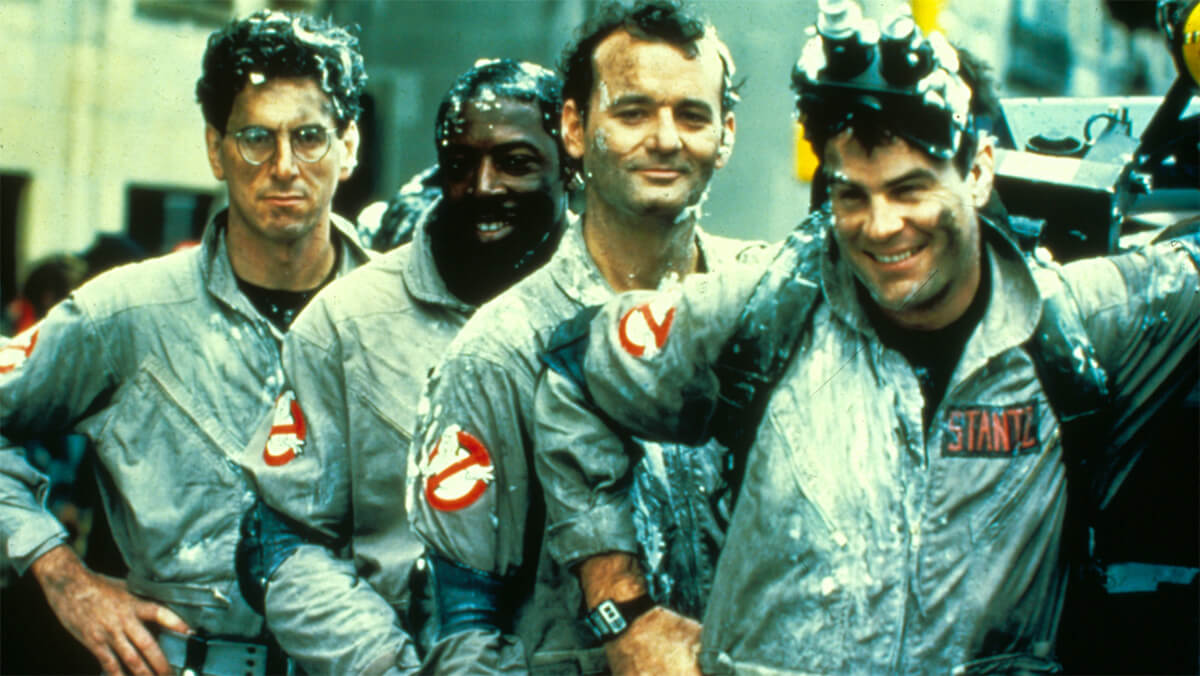 Home Alone is one of the few Christmas movies that are strong enough to watch any time of the year, and that's in part because it's hilarious. When 8-year-old Kevin accidentally gets left at home for his extended family's holiday trip to Paris, he believes all of his dreams have come true—that is, until two thieves set their sights on his lavish home as the scene of their next heist. Of course, Kevin isn't your average kid, booby-trapping his house against the criminals to make attempts to steal from him a painful and miserable ordeal, and learning a few things about the importance of family along the way. 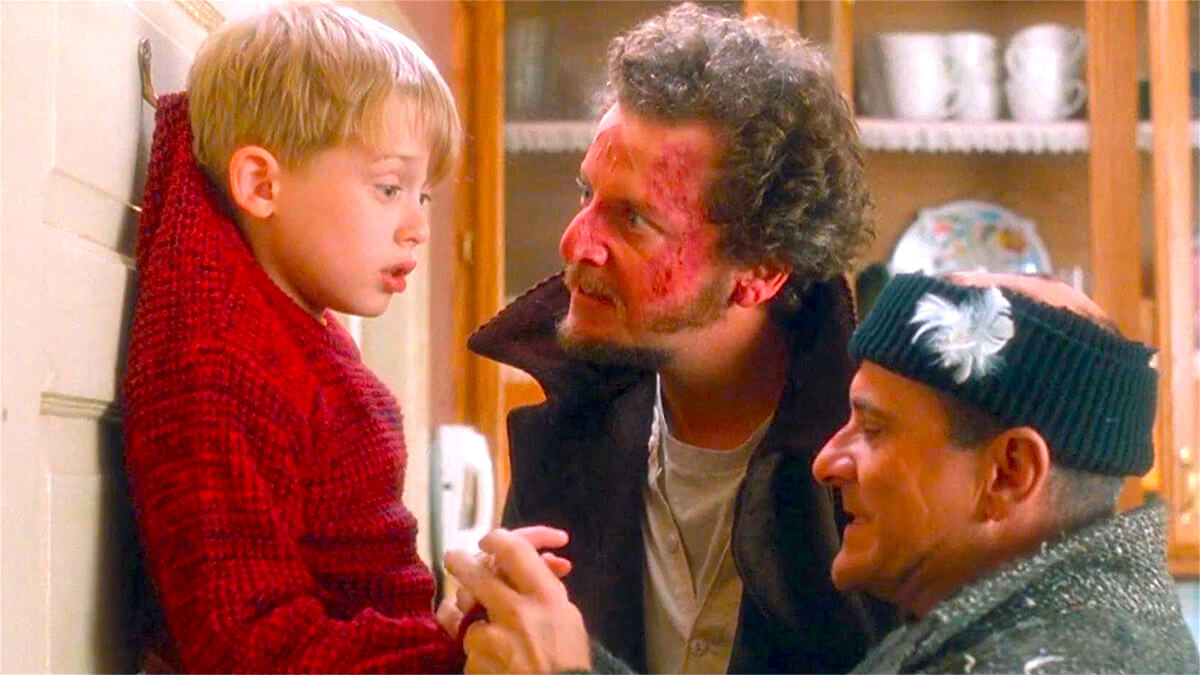 What if real aliens stumbled upon episodes of Star Trek and thought the characters were real space explorers? That's precisely the premise of the hilarious Galaxy Quest, in which aliens called the Thermians kidnap the actors from a '70s sci-fi show of the same name from a convention during a cast reunion in order to recruit their help and save them from an evil warlord called Sarris. Of course, the "crew" has no idea what they're doing as they travel through space for the first time, but when the aliens' safety becomes their responsibility, they step into the roles the best they can to save the day. 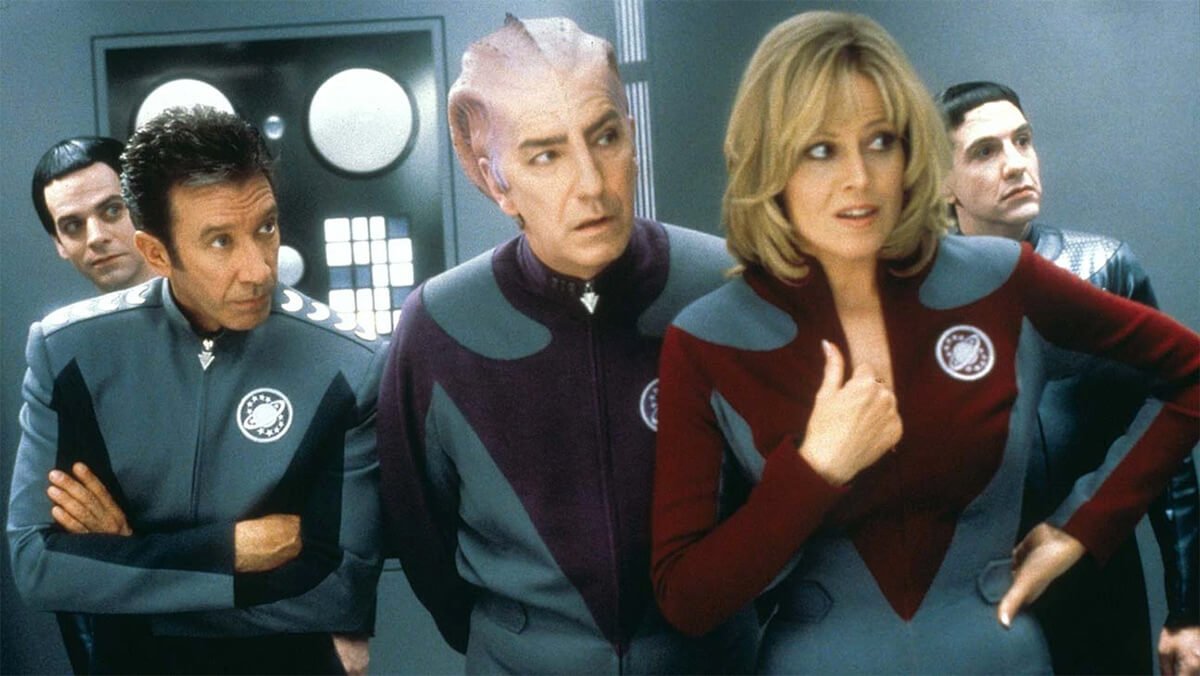 Not all great comedies come out of Hollywood, and we think Hot Fuzz is one of the best examples, with particularly stylish direction by Edgar Wright. The classic, starring Simon Pegg and Nick Frost, is about a high-achieving London cop who gets reassigned to be a sergeant in a quiet, sleepy town where his skills are essentially useless. However, when a series of crimes do crop up, he begins to dig deeper and believe they're all tied together—but how deep does the conspiracy really go, and is it possible that the whole town is in on it? 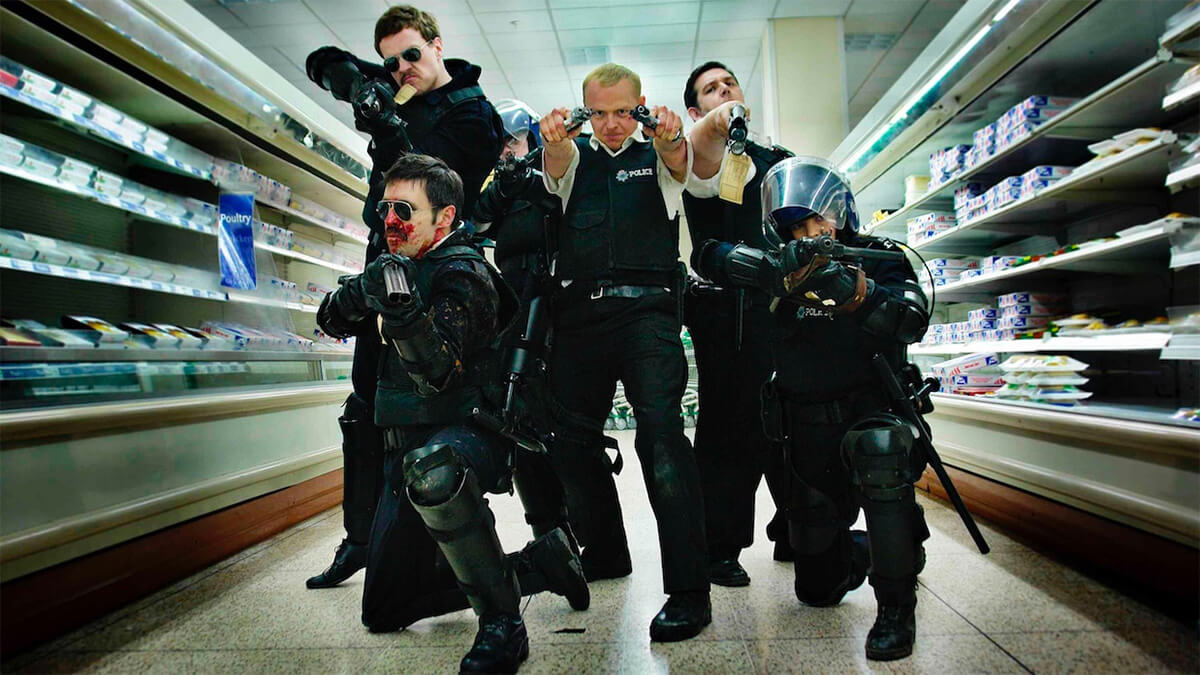 While all of Wes Anderson's films are brilliant and filled with comedic moments, we don't think it gets funnier (or more visually stunning) than The Grand Budapest Hotel. The movie stars Ralph Fiennes as the concierge at a popular European ski resort in the 1930s. He's willing to go to any lengths to provide great service to his guests, but when doing so ties him to a murder, he must work with his new protégé Zero to secure a valuable painting left to him by the murdered woman, with an impending war further threatening the grandeur of the beautiful titular hotel. 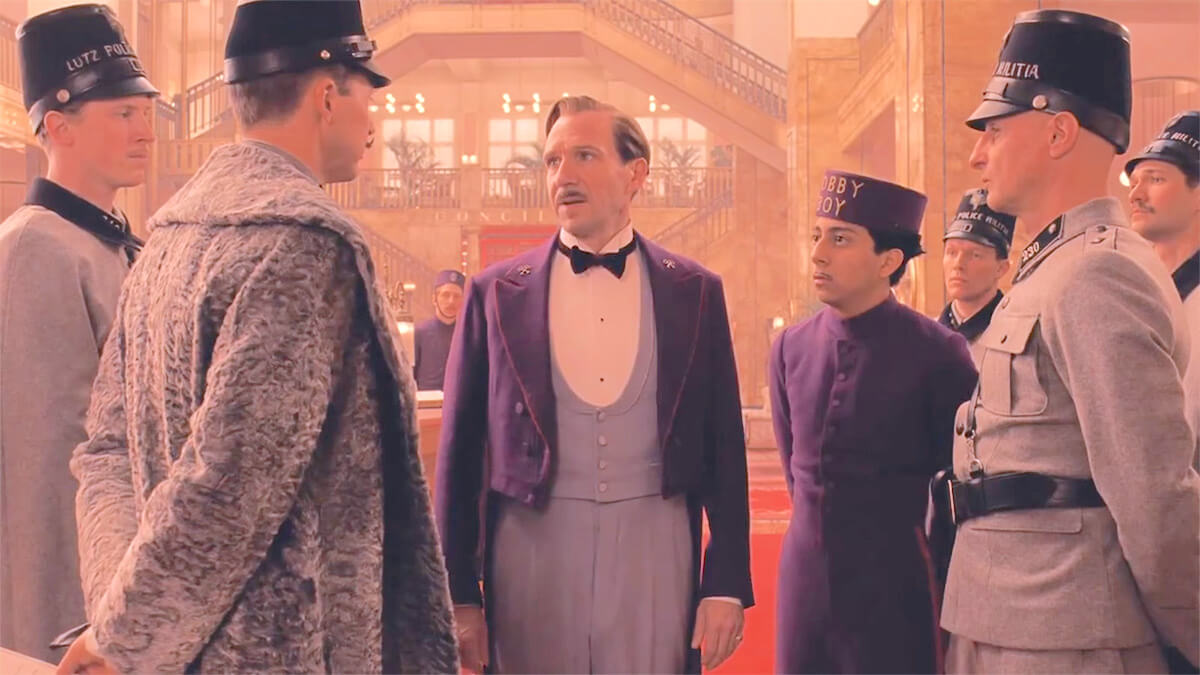 Also read about: The 16 Movies We Can't Wait to See This Fall

What We Do in the Shadows

What if The Office wasn't about office workers, but vampires living out their lives in New Zealand? What We Do in the Shadows follows vampires Vlad, Viago, Deacon and Petyr, with a camera crew following around the roommates as they reveal what life is like as a sun-hating immortal to the world. It stars Jemaine Clement and Taika Waititi in some of their funniest roles ever, with all of the vampire jokes you could imagine, and also inspired the popular TV series spin-off. If you love the show, be sure to check out the film to see where it all started. 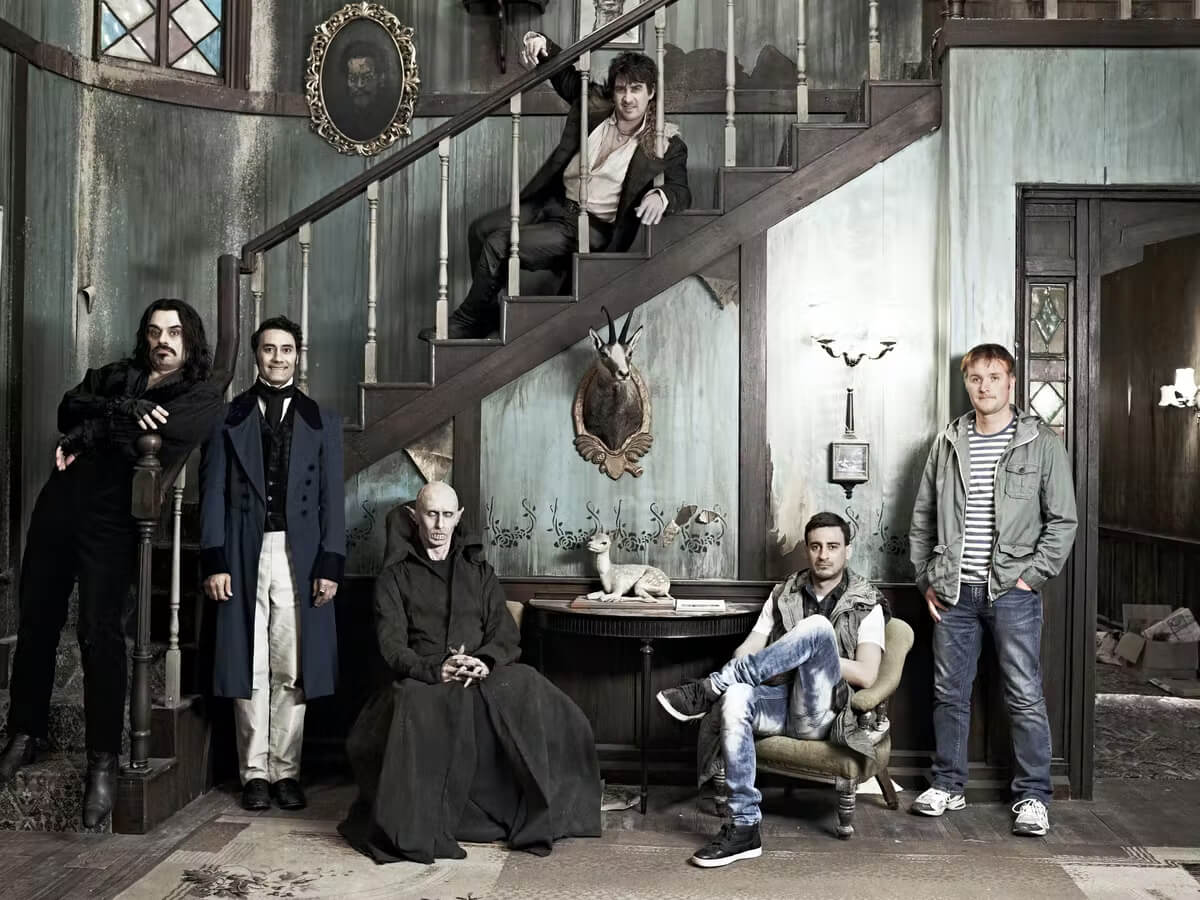 (What We Do in the Shadows via Unison/Paladin)

Looking to also discover some action classics? Click HERE to check out a list of our favorites.